The white paper, titled "China and Africa in the New Era: A Partnership of Equals," said shared past experiences and similar aims and goals have brought China and Africa close together. 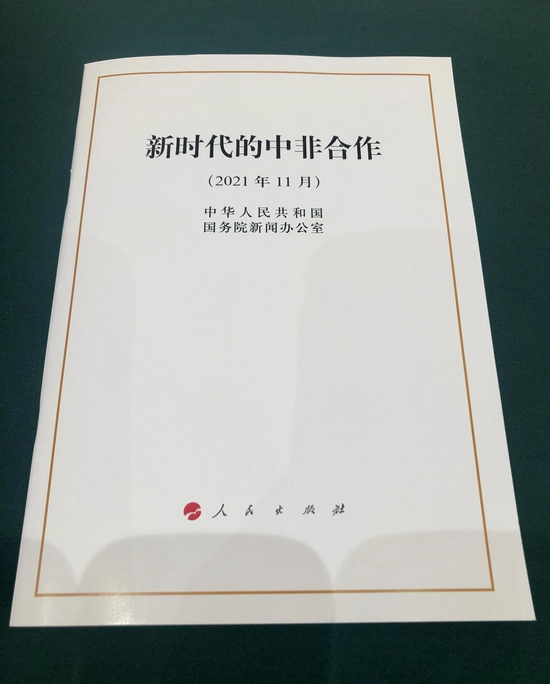 China and Africa will always be a community of shared future, it added.

Developing solidarity and cooperation with African countries has been the cornerstone of China's foreign policy, as well as a firm and longstanding strategy, said the white paper.

It noted that the dual successes of the Johannesburg Summit in 2015 and the Beijing Summit of the Forum on China-Africa Cooperation (FOCAC) in 2018 pushed China-Africa cooperation to a new and unprecedented high.

President Xi Jinping and African leaders unanimously decided at the FOCAC Beijing Summit that the two sides would work to build an even stronger China-Africa community of shared future, advance cooperation under the Belt and Road Initiative, establishing a new milestone in China-Africa relations, said the white paper.

China and Africa trust each other and China-Africa friendship is rock-solid, the white paper said. It added that China is committed to consolidating China-Africa political mutual trust, expanding pragmatic cooperation with Africa in various areas, and extending its help to boost peace and development in the continent.

After years of dedicated efforts, the tree of China-Africa cooperation has flourished -- it is tall and strong, and cannot be shaken by any force, according to the white paper.

Friendly relations between China and Africa have endured through more than half a century and withstood the test of time, and the two sides have always stood firmly together at critical junctures and on major issues, said the white paper.

China and Africa have joined forces in confronting the grave challenge posed by COVID-19, further reinforcing their friendship, the white paper said, noting that the solidarity between the Chinese and African peoples enables them to overcome difficulties and obstacles and build a bright future.

Stressing that the global governance system and the international order are changing at an accelerating rate, and the international balance of power is undergoing a profound adjustment, the white paper called on China and Africa to further consolidate their partnership, and build a China-Africa community of shared future in the new era.

The two sides will steadfastly reinforce their traditional friendship, promote mutually beneficial cooperation, and safeguard common interests, according to the white paper.

China and African countries will continue to set the pace of cooperation through FOCAC, support the Belt and Road Initiative, bring the China-Africa comprehensive strategic and cooperative partnership to a higher level, and deliver a brighter future together, the white paper noted.