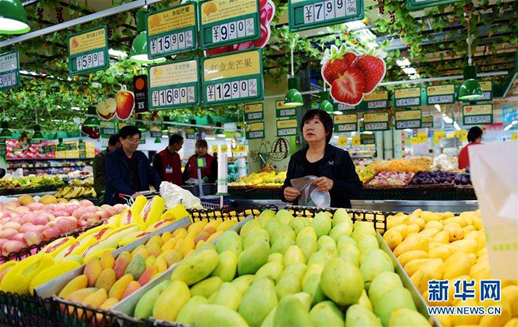 The Consumer price index (CPI), a main gauge of inflation, rose 2.1 percent year-on-year in July, according to the National Bureau of Statistics (NBS) Thursday.

The growth was faster than the 1.9-percent rate recorded in June and the 2-percent expected by the market. It was also the highest level since March.

NBS statistician Sheng Guoqing attributed the growth to strong demand for traveling during the summer vacation.

The carryover effect also played a role, contributing 1.4 percentage points to the 2.1-percent year-on-year CPI growth, according to Sheng.

China Merchants Securities predicted that the uptick in inflation would not be sustained in future, citing lower pork prices.

The price of pork, China's staple meat, continued to slump in July, down 9.6 percent year on year, dragging down CPI growth by 0.24 percentage points. On a monthly basis, however, it registered a 2.9-percent increase, faster than the 1.1-percent rise in June.

Despite the recent rebound, the pork price will still drag down the annual CPI growth by 0.2 percentage points, China Merchants Securities estimates.

It maintained the forecast that the monthly inflation rate will not exceed 3 percent this year, leaving room for monetary policy maneuvering.

Authorities have pledged to continue a prudent monetary policy in the second half of this year while increasing support for the real economy.

China is aiming to keep annual CPI growth at around 3 percent this year, the same as the target for 2017.

The average year-on-year CPI growth for the January-July period stood at 2 percent, according to the NBS.

The NBS data also showed the producer price index, which measures costs for goods at the factory gate, rose 4.6 percent year-on-year in July. The growth slightly slowed from the 4.7-percent increase in June.