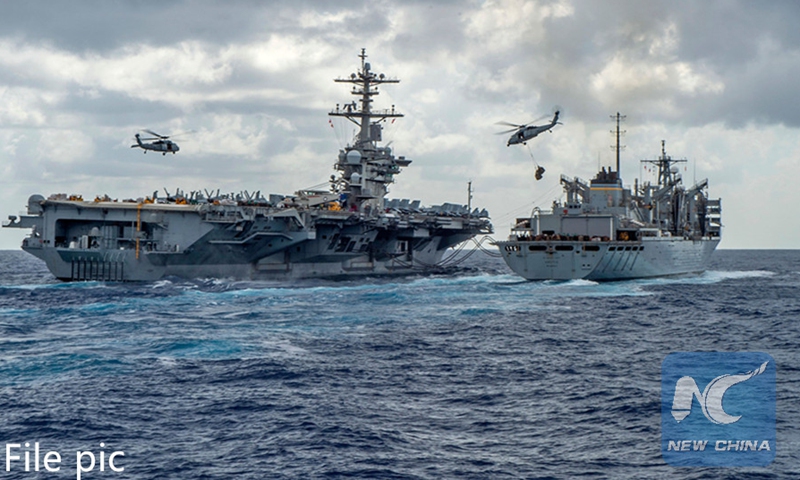 The US Navy reportedly conducted dual aircraft carrier exercises on Saturday and Sunday to the southeast of Okinawa, not far from the location where the Liaoning aircraft carrier group of the Chinese People's Liberation Army (PLA) Navy just wrapped up its three-week-long drills.

Likely one of the main maritime battlefields if the US militarily intervenes in a possible conflict across the Taiwan Straits, this region is of strategic significance, and the US drills that closely followed the PLA exercises obviously aimed to provocatively lend support to secessionists on the island of Taiwan, said analysts.

While the US 7th Fleet announced the dual carrier drills on its Twitter account on Sunday, it had not revealed the location as of press time. But since a commercial satellite image caught one of the carriers in the region on Sunday, it is confirmed that the US drills are being held in the southeast of Okinawa, the SCSPI said.

The US dual carrier drills came after the PLA Navy's Liaoning aircraft carrier group returned to the East China Sea via the Miyako Strait from its far sea training in the West Pacific on May 21. According to Japan's Ministry of Defense Joint Staff, the Chinese carrier group entered the West Pacific on May 1 and carried out what observers said was the longest and most sortie-intensive exercise south of Okinawa and east of the island of Taiwan.

That both China and the US sent aircraft carriers for drills in the same region indicates the high strategic value of this region, and it could become a main maritime battlefield between the two countries should the US intervene militarily in a possible reunification-by-force operation on the island of Taiwan by the PLA, a Beijing-based defense analyst who requested anonymity told the Global Times on Sunday.

By sending two super carriers to the region right after the Chinese carrier drills, the US is attempting to console and lend support to "Taiwan independence" secessionist forces and Japanese military expansionists, which sends a very wrong signal and could make the regional situation worse, the above-quoted analyst said.

The PLA must have monitored the whole situation thanks to its complex situational awareness system, which is much more powerful and precise than commercial and open data, the analyst said.

On China's doorstep, even the US cannot rival the PLA when it comes to China's core interests, experts said, noting that the PLA's "carrier killers" including anti-ship ballistic missiles will join warplanes and vessels in denying external interference in the Taiwan question if it comes to that.