LHASA, March 22 (Xinhua) -- Shelf by shelf, scroll by scroll, and page by page, restorers have begun the largest project so far to conserve antique documents at the Potala Palace, an icon of Tibetan Buddhism.

The Potala Palace, in Lhasa, the regional capital of Tibet Autonomous Region, was built by Tibetan King Songtsa Gambo in the seventh century. The immense religious complex, also a UNESCO World Heritage site, is a treasure house of Tibetan history, culture and art. 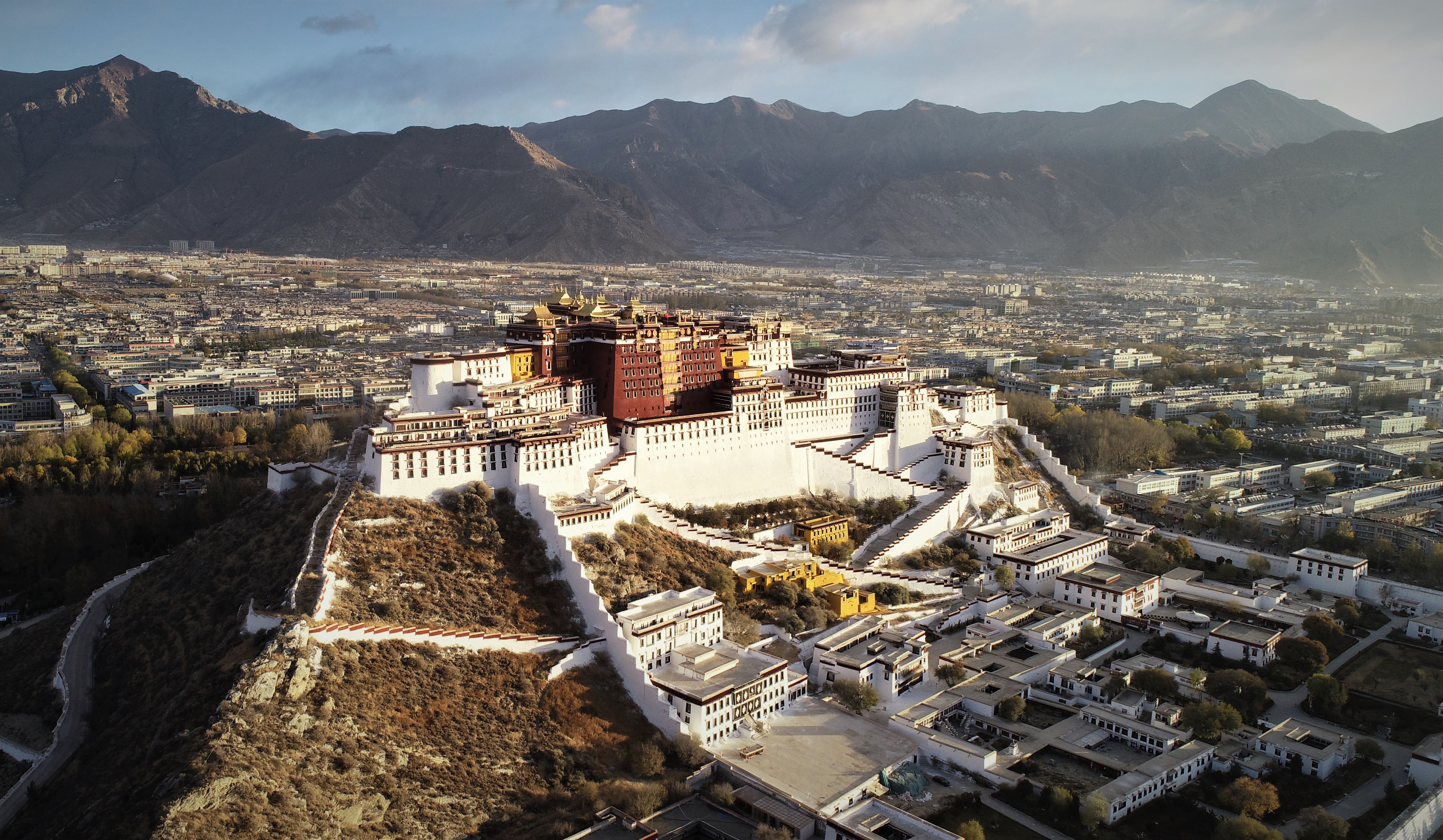 In the latest effort to preserve the palace, the Chinese government earmarked a special fund of 300 million yuan (about 44.9 million U.S. dollars) to conserve and explore the use of ancient documents in the palace.

The project, undertaken by the Chinese Academy of Cultural Heritage, started at the beginning of the year and is expected to be a 10-year process of protection, repair, digitization and exhibition. 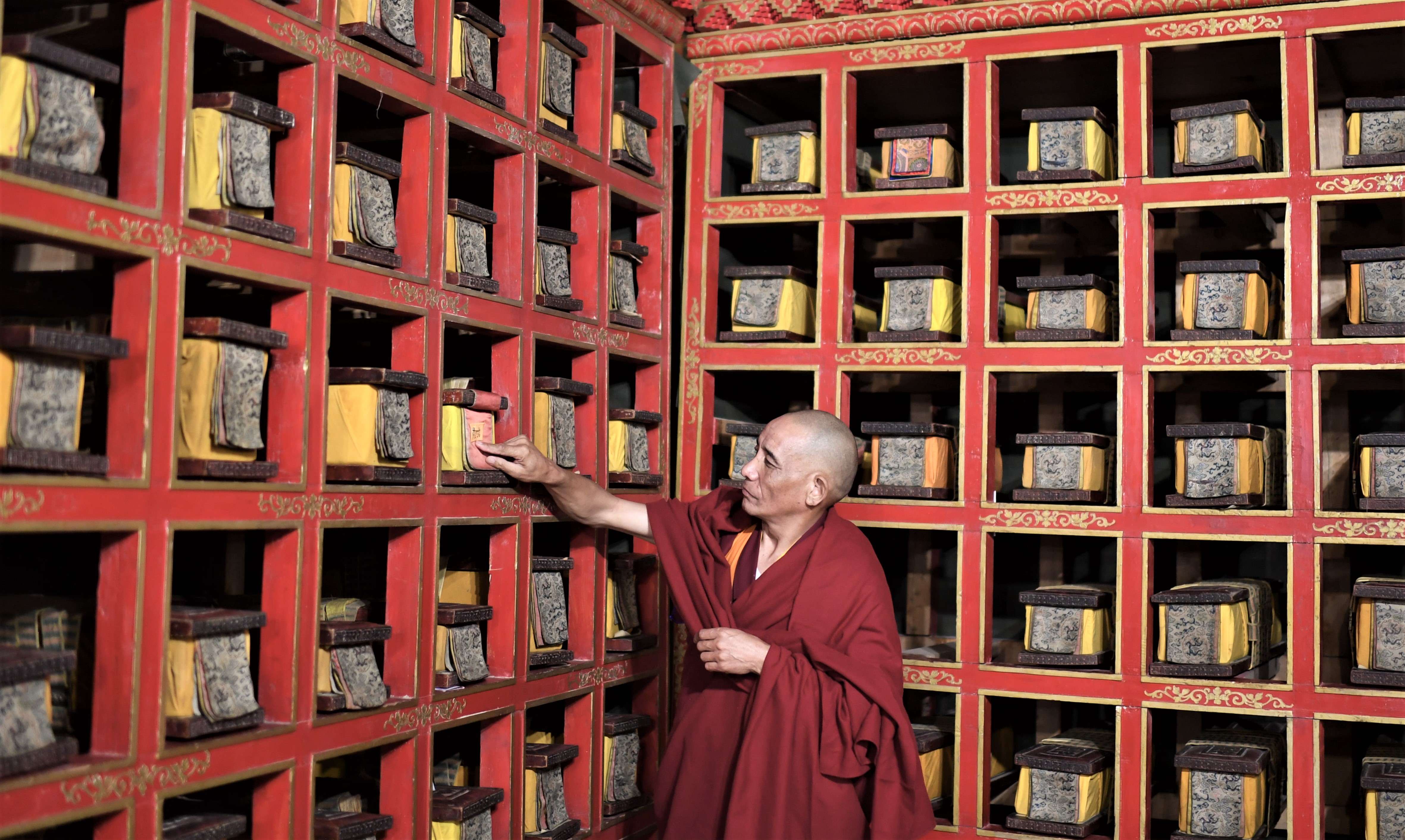 "It is stunning to see so many rare ancient documents distinctive in content, versions and artistic value," said Pedron, an expert from the ancient documents protection center of Tibet, who leads 24 people, including two lamas from the palace, to register the archives into computers.

The team will study and ascertain the time of creation for all of the archives, and digitally document each book's title, main content, weight and other specifications in Tibetan and Mandarin, Pedron said.

"Our work will supply well-rounded information on the antique files and replenish the palace database," he said.

Covering 41 hectares -- roughly the size of 55 football fields -- atop a craggy hill in the heart of Lhasa, the Potala Palace is home to large quantities of precious books written with gold, silver, turquoise, in wood, brocade, pattra leaves and on Tibetan papers.

The Potala Palace, which has been placed under top state protection, underwent a 200-million-yuan maintenance project from 2002 to 2009. A special repairing project on its gold-plated roof ended last year, costing another 31 million yuan. 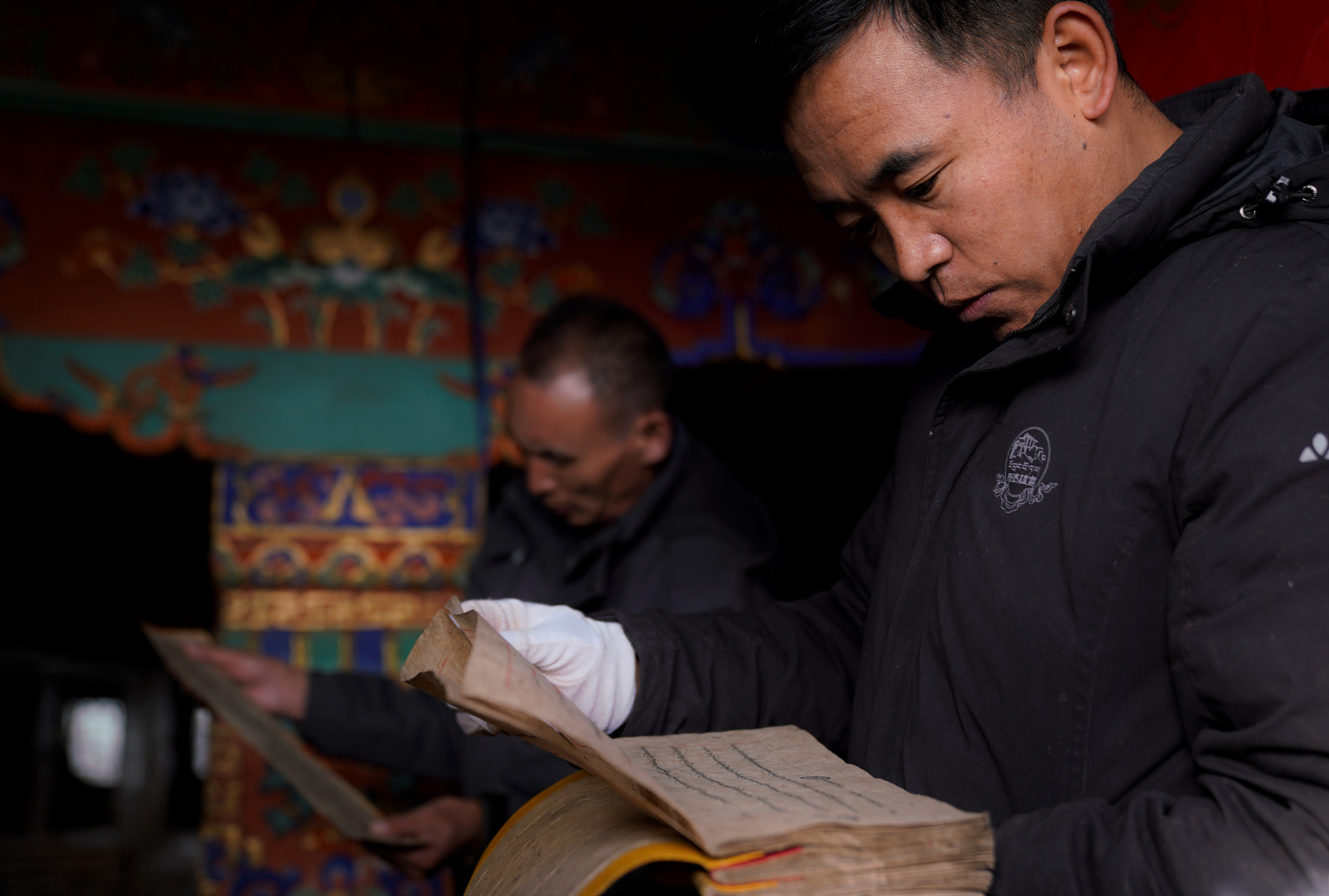 The palace keeps nearly 40,000 volumes of antique texts in Mandarin, Tibetan, Manchu, Mongolian and Sanskrit. For a lot of the documents, the Potala Palace has the only existing copies, Pedron said.

The most significant include about 30,000 pattra leaves scriptures and the Tibetan Kagyur of the Tripitaka, or the discourse of Buddha, dating back to 1410. It also houses writings by senior monks, books on medicine, history and vast amount of the Tibetan Buddhist canon.

The Potala Palace established a special panel for the protection of ancient texts in the 1970s, who repaired part of the antique books and published four-volume indexes of the palace's collection of historic texts. In 2016, a workshop was set up at the Potala Palace, with the mission to repair the ancient books.

The historical texts and books are kept in different halls.

"The books and scriptures have remained there for hundreds of years," said Padma Losang, head of cultural relics protection division with the palace administrative office.

To the south of the West Hall is a giant scripture shelf about two stories tall and 43 meters long.

This shelf alone contains 1,405 volumes of ancient documents, including the Kagyur, written with gold and silver, said Padma Losang. "Protection of the books is like a race against time. Though most are wrapped in cloth or supported by boards, some have suffered damage due to natural wear and tear," he said.

Conservation specialists, wearing gloves and masks, are taking out the fragile papers to create a bibliographic index.

"The next step is to repair, research, properly manage and explore the value of the files. This project is a wonderful opportunity to train a group of people specialized in antique document protection and exploration at the palace," Padma Losang said.

The Potala Palace hosted 1.6 million tourists in 2018. Its daily cap during the busy season is 5,000 tickets.

Palace staff and conservation specialists are hopeful that the public will be brought closer to the centuries-old treasures and find modern significance in the old papers.

In 2006, a special project was launched to preserve one of the most precious inventories -- scriptures written on pattra leaves.

It is believed that fewer than 1,000 volumes of the pattra leaves scriptures remain in the world, of which, about 60 to 80 percent are in Tibet, with the Potala Palace as a main location.

Now the leaves are kept in boxes made from birch wood and stored at a special warehouse, reinforced with surveillance equipment.

"It takes the presence of at least three people to open the gate to the leaves warehouse. No one can skirt this rule," said Jorden, deputy director of the palace administrative office.

Due to the rarity of the leaves, they are hardly exhibited to the general public.

"We need to explore how the rare books can be seen by the public, whether digitally, or in other ways, so that their values are fully explored," Jorden said.

Experts said they planned to establish a research institute for the digitization and database construction of the archives at the Potala Palace. The digital files are expected to be accessible to researchers and the general public in the future.

The team of conservation specialists, seven of whom are women, are working inside the palace.

"There are so many books. The job probably takes 10 years or even longer. It's a life's work," said Tashi Lhamo, an employee at the palace.