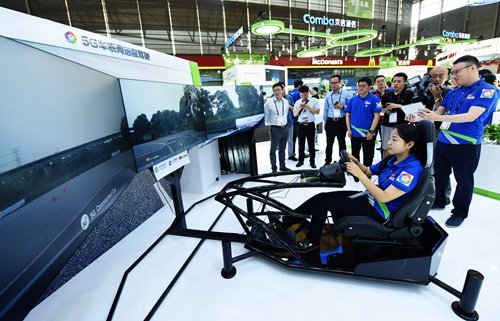 Exhibition guests try out internet-connected cars enabled by 5G technology at an industry conference in Shanghai in June 2017. Photo: VCG

China is taking the lead or at least holding the line against Western rivals in the global race to set up fifth-generation (5G) networks, and the country will be able to commercialize such services by 2020 or earlier, experts said.5G is the next generation of wireless network technology, which is about 10 times faster than 4G while using less power. On Thursday, domestic handset-maker ZTE Corp said on its WeChat account that "with a focus on 5G core technology for many years, the company has already become a major contributor to global 5G standards." For several years, the smartphone maker has actively cooperated with telecom operators to hold 5G tests, while also "putting out a series of end-to-end products including wireless access, core networks and transmission facilities, which covered different frequency channels and can be applied to different scenarios," said the post.ZTE is not alone in its endeavor to push forward 5G innovations.Chinese telecommunications giant Huawei, along with UK-based multinational network provider Vodafone, also announced in early February that they had completed the first 5G call in the world from the town of Castelledefels, close to Barcelona, to Madrid with a bandwidth of 3.7 gigahertz, the Xinhua News Agency reported.The call was made using a dual "4G to 5G connection" at speed that was eight times faster than the current 4G standard, said the Xinhua report, noting that the test signaled that Huawei is one step closer to launching smartphones with 5G capacity. Analysts said the achievements of Chinese telecom equipment makers like ZTE and Huawei show China's advances in building 5G networks.  Xiang Ligang, chief executive of domestic telecom industry news site cctime.com, told the Global Times on Thursday that China's handset producers have an edge in developing 5G terminal devices compared with their US competitors.  "In terms of the research and innovation ability, the global top four telecom equipment suppliers are Huawei, Ericsson, ZTE and Nokia… two out of the four are Chinese technology giants and we could barely name a US company," he said. "Without 5G-capable terminal devices, you cannot access a 5G network." Xiang said this year will be a watershed for China's 5G technology development, when the final testing of basic 5G technologies will be completed, paving the way for the next phase of development - 5G products such as terminal devices.  In addition to compatible terminal devices, China's investment in 5G infrastructure also bodes well for its position in the intensifying global competition.Under the guidelines of the National Development and Reform Commission, the country's three State-owned network operators - China Mobile, China Unicom and China Telecom - have each announced plans to begin building 5G networks this year in at least five cities.China Mobile said in February that it may be able to offer a full 5G service by the end of 2019, a year ahead of the 2020 goal, thanks to a technology known as "slicing packet networks," which help operators to manage network architectures, bandwidth, traffic, latency and time synchronization, said another Xinhua report. AT&T Inc said on Tuesday that it will first roll out 5G networks in three locations: Dallas, Waco, Texas and Atlanta, with more cities in the coming months, CNN reported. But the US-based telecom operator may find itself "facing a task much more complicated than expected," Xiang commented."China, without any doubt, has advantages in building 5G network infrastructure thanks to its rich experience in setting up 4G networks," he said, noting that the country has two-thirds of the world's base stations. "We know how to build base stations that are stable, small and energy-efficient," Xiang said.Li Yi, a senior research fellow at the Internet Research Center of the Shanghai Academy of Social Sciences, said that China's dominant status in the global competition to establish 5G networks is also reflected in its active participation in the formulation of global standards. China's domestic core 5G technologies in such sectors as polar codes have been adopted by the 3rd Generation Partnership Project, an international collaboration of seven telecoms standard development organizations that draw up complete mobile system specifications."From following Western rivals' steps in 2G and 3G to catching up with them in the 4G era, to a forerunner in 5G… It is remarkable how Chinese companies have gained a foothold in the 5G battle," Li told the Global Times on Thursday.