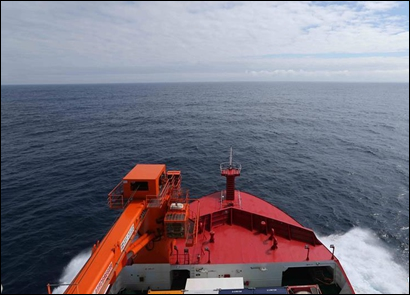 If you want to see where global warming is happening, look to the seas.

The world's oceans in 2019 were the warmest in recorded human history, a new article said on Tuesday. Conducted by an international team of 14 scientists from 11 institutes worldwide, the study also found that global ocean temperatures continue to rise and speed up.

According to the article published in the journal Advances in Atmospheric Sciences, global ocean temperatures in 2019 were about 0.075 degrees Celsius higher than the average from 1981 to 2010.

To make such a tiny temperature change happen, the Earth's oceans have absorbed a huge amount of heat equal to 3.6 billion Hiroshima atom bomb explosions, said Cheng Lijing, lead author of the article and researcher at the Institute of Atmospheric Physics (IAP) of the Chinese Academy of Sciences.

"This measured ocean warming is irrefutable and is further proof of global warming," Cheng said.

Data used in the study were recorded by China's IAP and the US National Oceanic and Atmospheric Administration. A new method allowed the researchers to examine warmth trends dating back to the 1950s.

Records for ocean warming have been broken almost yearly since 2017. The study also found that over the past six decades, the world's oceans have increased in temperature on average by 450 percent - and the past five years have been the warmest on record.

"If you want to understand global warming, you have to measure ocean warming," said John Abraham, co-author and professor at the University of St. Thomas in the US. He stressed that ocean warming is an important indicator of global climate change since the vast majority of global heat ends up in the oceans.

The effects of global warming are already appearing and will continue to appear in 2020 in the form of more extreme weather, rising sea levels and losses of ocean animals.

Marine heat waves in the North Pacific in 2013, hurricanes near the Gulf of Mexico in 2017, and the recent catastrophic fires in Australia are the major consequences of global warming, said the researchers who also called for global action to reverse climate change in the article.

"There are no reasonable alternatives apart from the human emissions of heat-trapping gases to explain this heating," Cheng said.

"The more we reduce greenhouse gasses, the less the oceans will warm," said Cheng, suggesting that reduce, reuse and recycle are the major ways forward to clean-energy development.

However, humans can work to reverse their effect on the climate, but the oceans will take a longer time to respond than the atmosphere and dry land.

Researchers will further examine how warming impacts oceans beyond temperature. They plan to study how water temperatures affect the water's buoyancy, which directly affects the distribution of nutrients and heat.