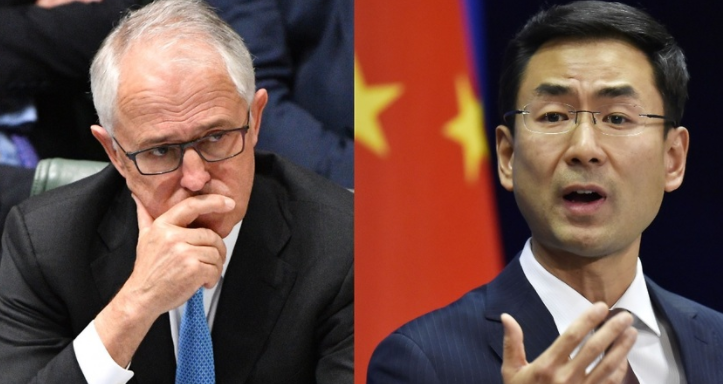 "We are shocked by some Australian leader's remarks," Geng said. "Those remarks were made to cater to some irresponsible reports by the Australian media, which were full of discrimination against China and made from nothing but gossip. [Theses reports] have poisoned Sino-Australian ties and damage the foundation of mutual trust."Australian Prime Minister Malcolm Turnbull said this week that foreign powers were making "unprecedented and increasingly sophisticated attempts to influence the political process" in Australia and the world. He cited "disturbing reports about Chinese influence," Reuters reported on Friday.

"Media reports have suggested that the Chinese Communist Party has been working to covertly interfere with our media, our universities and even the decisions of elected representatives right here in this building. We take these reports very seriously," he said, Reuters reported.

China expressed strong dissatisfaction and lodged solemn representations with the Australian side, Geng said, adding that China has developed ties with Australia on the principle of non-interference in internal affairs.

"We strongly urge relevant person in Australia to give up Cold War mentality and prejudice toward China, stop making comments, which would harm political mutual trust and mutually beneficial cooperation, and take effective actions to dispel negative effects," Geng said.

The Chinese Embassy in Australia on Wednesday accused Australia of hysteria and paranoia after Turnbull vowed to ban foreign political donations to curb external influence in domestic politics, Reuters reported.