China has lodged solemn representations with the US over reports that it is considering changing the name of a "representative office" of China's Taiwan region in the country, Chinese Foreign Ministry spokesperson Zhao Lijian said on Monday. 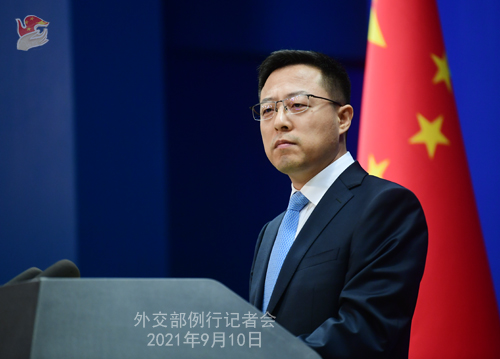 “The Taiwan question is the most important and sensitive core issue in China-US relations, and the one-China principle lays the political foundation between the relations. The US has made it clear in the Joint Communique of the United States of America and the People's Republic of China that the American people will only share unofficial relations with the people in Taiwan, and on September 10, President Biden also declared that the US had no intention to change the one-China principle,” Zhao said at a routine press conference.

“The US should strictly abide by the one-China principle and the provisions of the three China-US joint communiques. We hope the US can keep its promises and halt any form of official interaction with Taiwan, which includes any attempt to change the name of ‘Taipei Economic and Cultural Representative Office in the US’. The US should also be careful not to send the wrong signals to separatist forces in Taiwan, and avoid damaging China-US relations or peace and stability across the Taiwan Straits.” Zhao added.