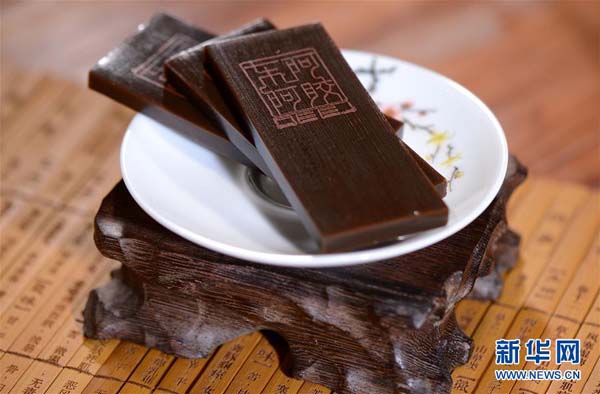 Facing a shortage of donkey skin to produce the traditional medicine ejiao, China will lower the tariff of imported donkey hides starting Monday.

A tariff adjustment plan for 2018, published on Dec. 27 by the General Administration of Customs, shows that the import duty rate for a whole piece of donkey hide of a certain weight will be lowered from 5 to 2 percent.

With a history of around 2,500 years, ejiao (donkey-skin gelatin) is made by soaking and stewing donkey skin and refining the results into a tonic to treat health problems such as anaemia and menopause-linked ailments.

Meng Xianqing, vice general manager of Dong'e Ejiao Co. Ltd., China's largest donkey-hide gelatin producer, estimated that the lowering of the tariff would help the company save import costs of over 6 million yuan (about 918,250 U.S. dollars).

According to the Qianzhan Industry Research Institute, the production of China's ejiao manufacturers has grown from 3,200 tonnes in 2013 to 5,600 tonnes in 2016, with an annual growth of more than 20 percent.

However, China's donkey population has nearly halved from 9.4 million in 1996 to 5.4 million in 2015, according to the National Bureau of Statistics.

Experts believe the animal's low fertility rate and long gestation period is the major cause for the decrease. Besides, fewer farmers are raising donkeys as pack animals due to agricultural industrialization.

Industrial insiders said the price of a single hide had grown from 20 yuan in 2000 to about 3,000 yuan currently.

There are about 44 million donkeys worldwide, mainly in Asia, North Africa and South America.

About 90 percent of the country's ejiao products are made in Shandong Province, which mainly imports donkey skin from Peru, Mexico and Egypt.

Meng Xianqing said the lower tariff would ease donkey scarcity in the short run, and the fundamental solution was to improve breeding in China.