BASE CAMP, MOUNT QOMOLANGMA, China, May 10 (Xinhua) -- China is taking strict measures to prevent COVID-19 infections on Mount Qomolangma, and has reported zero infections so far on the north side of the mountain since the climbing season began in early April. 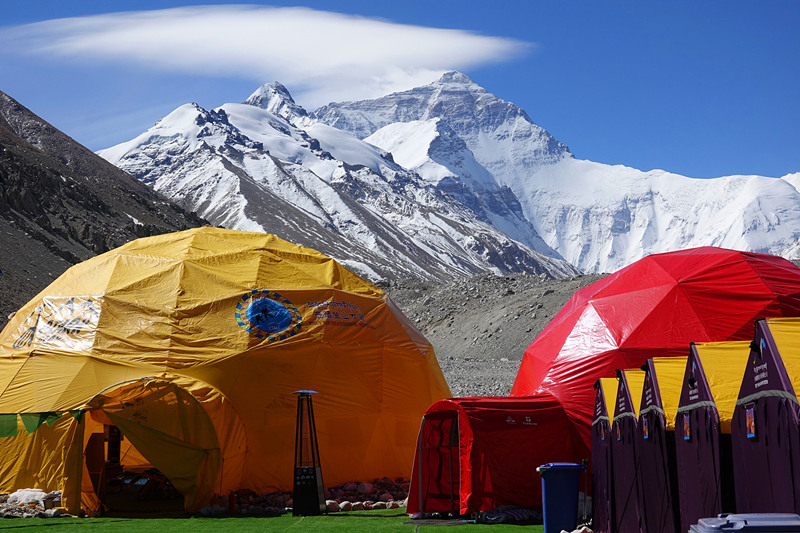 Officials spoke to Xinhua at a recent anti-epidemic meeting held at the mountain's base camp, where Tibet's regional sports bureau and the local government jointly discussed the situation at the world's highest peak at 8848.86 meters along the China-Nepal border.

21 expedition permits have been issued this year on the north side of the mountain, all to Chinese citizens. According to the China Tibet Mountaineering Association (CTMA), no foreign nationals have been allowed into the Qomolangma area since the outbreak began last year.

"We put strict anti-epidemic measures into action in all the camps along the climbing route this year," said Nyima Tsering, head of the Tibetan Sports Bureau.

Daily disinfection is required in climbers' sleeping camp, canteen, washrooms and all other common areas, and CTMA officials ensure that climbing teams are fully equipped with masks, sanitizer, medical gloves, and other medical equipment to cover at least one month. All personnel and cars returning to the camp must be disinfected, and anyone who develops symptoms of COVID-19 will be transported to local medical facilities.

The CTMA set up a checkpoint 300 meters from the base camp, keeping non-related persons outside. Although tourism around Mt. Qomolangma has resumed earlier this year, tourists are still forbidden to go inside Mt. Qomolangma National Reserve's core zone, the entrance of which is about a 10-minute drive from base camp.

COVID-19 has reached the base camp on the Nepalese side, overseas media reported, and a Kathmandu-based hospital confirmed to Xinhua that a few mountaineers airlifted from the base camp two weeks ago had tested positive.

"We are keeping in touch with the Nepalese side to adjust our climbing plan," said Nyima, revealing that a "zero contact strategy" is being worked out, in order to maintain certain distances between climbers from different sides of the peak if they summit on the same day.

According to Nyima, a line of separation will be set on one side of the peak before the climbers leave for the summit from the camp at 8300 meters. The mission is to be carried out by a group of professional mountaineering guides who will reach the top along with the rope-fixing team.

"We are still working on the details of how to build that line," said Nyima.

For people who have lived under Mt. Qomolangma for generations, the snow peak stands not only for nobility and purity, but also for a chance of improving their livelihoods. Tsering Gedan, a home inn owner in Tsaxicong Town, the nearest town to Mt. Qomolangma, told Xinhua that business had been booming.

"I'm happy that the government has done a lot to control the epidemic," said Tsering, adding that his new hotel will soon open during the climbing season.

Many local climbers and mountaineering guides consider it their responsibility to protect the Qomolangma area.

"Many of our guides were born and raised here, and we've known the local people for years. They help us with the transportation and garbage collection. We live in their houses when going down the mountain," said Tsering Samdrup, head of CTMA. "We feel obliged to keep the mountain safe for its people, and also for humankind."