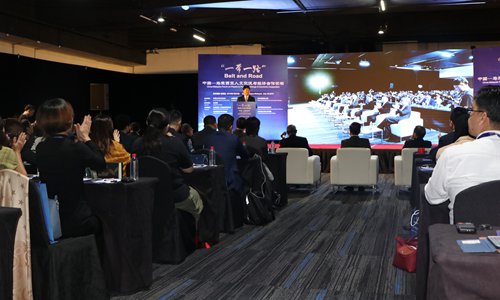 Closer economic and cultural bonds between China and Malaysia, two important countries along the sea route of the Belt and Road Initiative (BRI), will serve as a template for propelling growth amid the rise of US protectionism. That's the key takeaway from a forum in Kuala Lumpur on Monday attended by Chinese and Malaysian government officials and business executives.

He also cited the restart of the East Coast Rail Link project last week. The resumption called an end to a year-long suspension of the railway, designed to connect the Southeast Asian nation's east and west coasts, which has been downsized due to cost concerns.

It is believed that the rail project, when completed, will give Peninsular Malaysia a makeover, revving up the local economic and social development, the ambassador said, adding that Malaysia-produced items such as palm oil and durians have been identified to have tremendous business potential in the Chinese market.

In a fresh sign, Malaysia's Agriculture and Agro-based Ministry said in mid-June that the nation's exports of frozen durian fruit to China, which was approved by Chinese customs starting late May, are estimated to hit about 1,000 metric tons per month, adding close to 500 million ringgit ($121.26 million) to the nation's total export value annually, according to local media reports. Previously, only pulp, paste and processed durians were allowed to be shipped to China.

Xiao Yuan, a durian lover in Beijing claiming to be always ready to stomach the pungent fruit, said the availability of Malaysian frozen whole durians provides domestic consumers with more choice. "I feel that the love for the fruit is on the rise in China," he told the Global Times on Monday, saying Malaysian-grown durians could be an effective ambassador for the Southeast Asian nation, which he reckons is less known in China than Thailand, which also exports durian that is more popular among Chinese people.

The durian story is an example of the potential for substantial BRI-enabled growth. The initiative has struck a chord, pushing joint efforts in both nations to work toward fostering open and inclusive multilateralism, forum attendees said.

Malaysia has made its choice regarding BRI construction and the China-US trade war and Huawei, with Malaysian Prime Minister Mahathir Mohamad publicly voicing support for China's stance on many occasions, said Bai.

Both China and Malaysia advocate a free, multilateral trade mechanism, and are committed to creating a fairer, more reasonable international political and economic order, Bai said.

He told attendees that China welcomes the exporters of Malaysian products to explore opportunities in the Chinese market.

China has been Malaysia's top trading partner for the past 10 consecutive years and Malaysia remains China's second-largest trading partner among ASEAN members. Last year, bilateral trade reached $77.72 billion, an increase of 8.1 percent from 2017.

Calling for increased two-way business, Bai said China is willing to have talks with Malaysia concerning cooperation in the financial, agriculture and high-tech fields, and exploring the potential for bilateral partnerships in emerging industries including the digital economy and artificial intelligence (AI), which could foster new growth levers and power bilateral ties.

Delivering a speech on behalf of the secretary-general of the Ministry of International Trade and Industry in Malaysia, John Patrick Antonysamy, senior director of strategic planning for the ministry, said Malaysia, which has undertaken an initiative to embark on a fourth industrial revolution, welcomes cooperation and investment from China that will provide capital, create high-skilled jobs and push Malaysia's technological advancement.

"We entice quality investments that are driven by the use of advanced technologies such as robotics, AI and knowledge-intensive sectors which could spur the growth of our manufacturing base, all of which are strong folds of expertise that China will offer," he stated.

Multifaceted policies and measures are being mulled to facilitate Chinese businesses to tap into the opportunity in the Malaysian markets for autonomous driving and AI, among other emerging technologies, Nizmar Mohd Nazar, chief technology officer of Malaysia Automotive Robotics and IoT Institute, told the Global Times on the sidelines of a sub-forum on intelligent cooperation between China and Malaysia.

Along with economic cooperation, cultural bonding appears to be gaining a higher profile.

Ever since its inception, some Western countries have been critical of the BRI, said the special envoy.

This suggests that "along with China's growing regional and global clout, the Western world's fear of China's rise has grown, and outdated viewpoints from the Cold War era, including the China threat theory, have been repeatedly hyped," said Tan, urging the use of cultural soft power to resolve contradictions.

Chinese travelers made 3 million trips to Malaysia last year, according to Bai, the Chinese ambassador to Malaysia. He believes the number will continue to rise.

He also cited Xiamen University Malaysia, the first overseas campus set up by a prestigious Chinese university in Malaysia. Since the opening of the campus in Kuala Lumpur in 2016, more than 3,000 Chinese and foreign students have been admitted, with over 1,000 coming from Malaysia, according to the ambassador.

Greater cooperation is also expected between the two nations in the healthcare sector in which culture plays an important part.

With China and Malaysia getting deeply involved in the BRI cooperation, an increasing number of enterprises will engage in bilateral cultural and healthcare cooperation, Xue Shouchun, vice president of marketing at LKK Health Products Group, said at another sub-forum.