It is unavoidable that issues will surface in the process of cooperation between China and Malaysia, and the two countries can solve such problems through negotiation, China's Ministry of Foreign Affairs said on Tuesday. 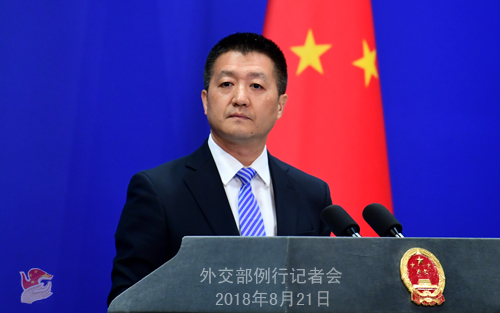 Malaysian Prime Minister Mahathir Mohamad said at a press conference before wrapping up his visit to China on Tuesday that two China-backed projects in Malaysia, including the East Coast Rail Link and the construction of two gas pipelines, have been cancelled for now.

Mahathir said that the current priority for Malaysia is to reduce its debt, according to the Malaysia-based New Straits Times.

"It is unavoidable that different views appear at different stages, but the two countries could solve such problems through negotiations based on their long-term and friendly bilateral relations," Lu Kang, Ministry of Foreign Affairs spokesperson, told a press briefing on Tuesday.

Chen Fengying, a research fellow at the China Institute of Contemporary International Relations in Beijing, told the Global Times on Tuesday that "it is understandable that Malaysia chose to change its development strategy amid the country's government transition, as well as a tight financial situation globally. Mahathir is quite pragmatic."

"It also shows that the cooperation between China and the Belt and Road countries are based on a mutually beneficial mode, as well as the changing situations of different countries, and meantime conducted under the overall 'Belt and Road' framework," Chen noted.

Details of the cancellation, including issues like compensation, would have to be discussed later, Mahathir said.

"Compensation is a must since if you break a deal, you have to compensate. That's common sense," Bai Ming, a research fellow at the Chinese Academy of International Trade and Economic Cooperation, told the Global Times on Tuesday. Bilateral investment agreements should be respected, Bai said.

"Malaysia is an important trading partner of China and is also an important node along the routes of the Belt and Road," he said.

The East Coast Rail Link is estimated to cost the government about $20 billion, the New York Times reported, while the gas pipelines agreement was worth about $2.5 billion.

Chen said that the move will not hinder bilateral relations, but there might be some adjustments in cooperation areas and models between the two countries.

China has always upheld the principles of reciprocity and mutual benefit in cooperating with different countries in trade and investment, and China's economic cooperation with Malaysia has maintained strong growth momentum, Lu added.

"During Malaysian Prime Minister Mahathir Mohamad's visit to China, he stressed the opportunities for Malaysia brought by China's development," Lu said, noting that China has been Malaysia's largest trading partner and such economic cooperation has brought benefits for people in both nations.