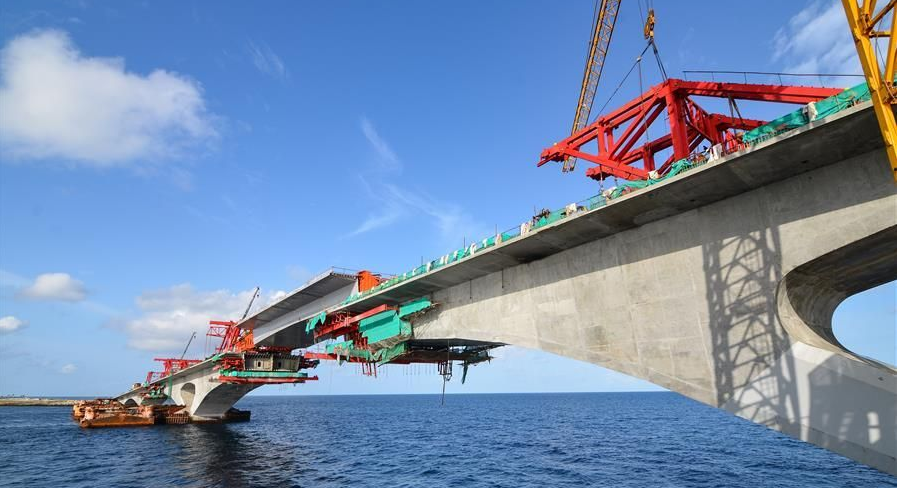 The Maldives on Thursday night put on a spectacular show in its capital city Malé as the nation celebrated the opening of the China-Maldives Friendship Bridge, hailed as the project of the century in the small Indian Ocean nation and a hallmark project of the China-proposed Belt and Road initiative (BRI).Although some said the Maldivian government will bear a heavy debt from the massive infrastructure cooperation with China, Maldivian officials said they appreciate China's generosity. Chinese experts noted that the bridge reflects China's visions of sharing opportunities, joint development and mutual benefits on the BRI, and infrastructure is essential for the country's long-term development.   As the scathing temperature cooled and night fell in Malé, local residents, many in traditional attire, gathered at a park near the bridge for the opening ceremony of the bridge and to become part of what local officials described as a dream coming true."Tonight, we celebrate the dawn of a new era for the Maldives. A dawn where Maldivians see their future unfolding into an age of progress and tranquility; a dawn where dreams can finally become reality, hopes prosper and life is more tenable," Maldivian President Abdulla Yameen, visibly emotional, told the thousands of people who cheered.Yameen switched to Chinese twice in his speech, saying, "Thank you, President Xi Jinping! Thank you to the people of China!" Construction of the bridge was first agreed upon by China and the Maldives during a visit by Chinese President Xi Jinping in September 2014. Ground was officially broken in March 2016 and the bridge was completed in July 2018. As part of the agreement, the project, which was built at a cost of 1.26 billion yuan ($184.44 million), was largely funded by China through direct aid and discounted loans to the Maldives, which together account for 91.8 percent of the total investment. The Maldivian government shouldered the balance,  according to a statement from the contractor, CCCC Second Harbor Engineering Company, a unit of China Communications Construction Company.China's BRI visionThe bridge, which links Malé to the islands of Hulhumale and Hulhule, where the country's largest airport is located, is the first sea-crossing bridge for the Maldives and is crucial to the country's long-term economic development, which faces lagging infrastructure and a lack of investments.China also helped the Maldives build roads and other infrastructure projects. The increased cooperation between China and the Maldives has even drawn the attention of some countries, most noticeably India. India is largely believed to be keeping the Maldives under its wings and some media reports suggest that the Maldivian government is handing over its country to China because of its debt.But Maldivian officials strongly denied such claims."Being the chair of the public accounts committee for the last four years, being the person who sat in the chair to revive the budget for the last four years… I can assure the international community nothing like that is happening. China has been very generous," Ahmed Nihan Hussain, majority leader of the People's Majlis, Maldives' Parliament, told the Global Times. Liang Haiming, chairman of the China Silk Road iValley Research Institute, told the Global Times on Friday that the China-Maldives Friendship Bridge, contrary to baseless claims and accusations about overseas Chinese investments, reflects China's vision for the BRI: sharing opportunities, joint development and mutual benefits."China proposed the BRI to bring tangible benefits to participant countries, including the Maldives. … [The bridge] represents a constructive step for both the BRI and the Maldives," Liang said, adding that China is helping these countries using its economic model, which gives great importance to infrastructure. "In China, we believe that to prosper, we must first build the road. We hope by helping to build roads for these countries, we also help their long-term development."