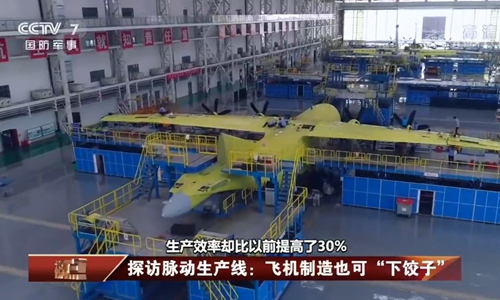 China is mass-producing special mission aircraft, including anti-submarine aircraft, early warning aircraft, surveillance aircraft and electronic warfare aircraft, a genre of warplanes that Chinese experts said on Sunday will help create a full information system that allows the Chinese military to recognize every hostile movement and even sabotage enemy communications.

The advanced assembly line has been recently built, has a size of more than two soccer fields and fused digital, information-oriented and intelligence concepts, CCTV said, noting that compared to the traditional assembly workshops at SAIC, the new pulse assembly line is 30 percent more efficient in manufacturing aircraft and requires less workers.

The pulse assembly line at SAIC has five stations, each is assigned with tasks of assembling certain components to its aircraft, said Peng Fei, chief engineer at SAIC, on CCTV.

Components will enter from station one, stopping at each station and leave station five as fully assembled aircraft ready for delivery, Peng said, noting that the next aircraft will enter the line as the previous one goes to the next station, enabling a very efficient manufacturing model.

The establishment of a pulse assembly line is an indication that China's special mission aircraft have entered a mass-production phase, a military expert who asked not to be named told the Global Times on Sunday.

"A pulse assembly line is only cost efficient when it produces a certain type of aircraft in large numbers, since the construction of such a line is expensive," the expert said.

For instance, as many as 10 fully assembled special mission aircraft including KJ-500 early warning aircraft and other surveillance aircraft can be seen parked in an open area at SAIC in a single screenshot of the official CCTV report. They are expected to take test flights and be delivered to the military.

Most of China's special mission aircraft are designed based on the Y-8 transport plane because of its large payload capability and utility, CCTV reported.

A massive fleet of these warplanes will weave a full information system in information-based modern warfare and give the Chinese military an edge by grasping every detail on the battlefield and disrupting hostile communications, the expert said.