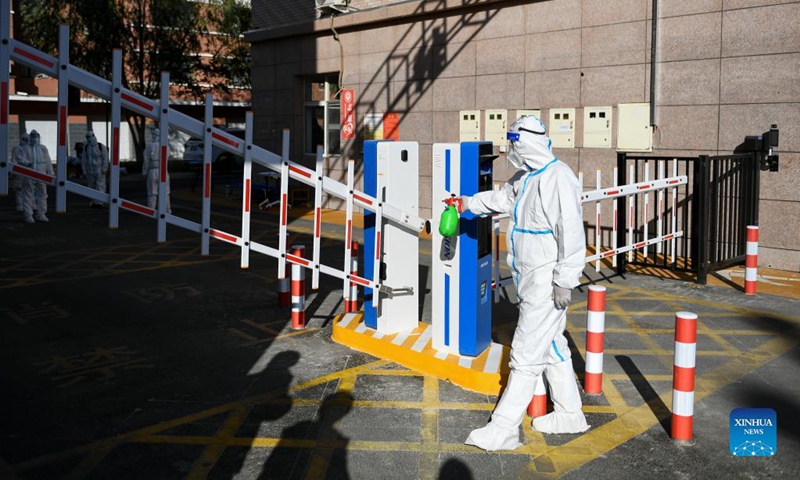 Ejin Banner in North China's Inner Mongolia Autonomous Region, which borders Mongolia in the north and comes under the spotlight for being the suspected source of the virus in latest COVID-19 flare-ups, has tightened lockdown management for stranded tourists and local residents. This comes after the city sacked the Party chief for dereliction of duty.

Dai Qin, the newly appointed Party chief of Ejin following the removal of former chief Chen Zhanyun on Tuesday, stressed the severity, complexity and the extreme urgency of the current epidemic prevention and control work on Wednesday. Qin has vowed to resolutely curb the virus spread that has already expanded to more than 11 provinces across China.

The flow of people in the city will be strictly managed under the new lockdown policy which requires all residents to stay indoors, and public security departments will deploy police forces and strengthen patrol in the streets, residential neighborhoods and settlement points for stranded tourists, Dai noted.

For anyone who disobeys the rules and goes out without permission, local authorities will strictly follow a "see one, catch one" manner and pursue legal responsibilities according to the law.

Echoing the lockdown policy, all civil servants in the city will be working from home to avoid cross-infections at workplaces, according to a notice from the banner's government WeChat account on Wednesday.

Inner Mongolia reported 12 new cases on Tuesday, 11 of which were from the Ejin. By Wednesday, the number of infections in Inner Mongolia reached 110, including 89 in this China-Mongolia border city with only 30,000 residents.

Ejin is known for its populous euphratica forest, which has become a popular tourist destination particularly in autumn. According to local officials, the number of stranded tourists in the city have reached 9,412 people, almost half of which are senior citizens aged above 60.

It is worth noting that at least seven confirmed cases in the city were related to a local port, a deputy director of Inner Mongolia's disease control and prevention center revealed.

Chinese health officials confirmed the latest epidemic resurgence in China being of the Delta variant, which was imported from overseas. While no specific source has been given, current epidemiological reports suggest that many confirmed patients have visited or worked at the port of Ejin.

To make up for the losses, local government has limited the hotel housing prices to no more than 200 yuan ($31) per night, which is less than half of the prices during this period compared with previous years.

Ejin announced on Sunday harsh punishment on six officials including local health commission's heads for their slack response and ineffective management since the COVID-19 broke out on October 17.