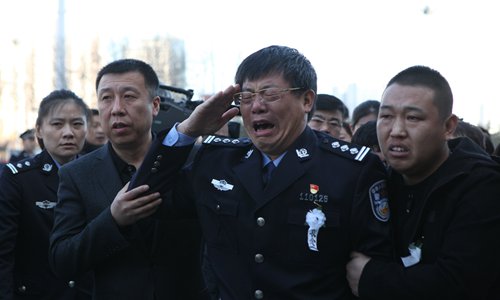 Li Hao (center), father of police officer Li Shangheng, 30, who was stabbed to death by a suspected burglar, salutes to the portrait of his son at the funeral held in Shenyang, Northeast China's Liaoning Province on April 4, 2018. (Photo: VCG)

China has commemorated more than 14,000 police who lost their lives in the line of duty since the establishment of the People's Republic, with activities held around the Qingming Festival to honor those heroes. In the past seven decades, more than 14,000 police officers have died while on active duty. They are the group who bled the most and sacrificed the most in the era of peace, the Xinhua News Agency reported on Sunday. During the Qingming Festival holidays that ran from Friday to Sunday, public security departments across China organized activities to commemorate officers who lost their lives on duty at local memorial halls and martyrs cemeteries, the Ministry of Public Security (MPS) said in a statement on Saturday. Police officers from various localities, including Beijing and Tianjin municipalities, Inner Mongolia Autonomous Region and Heilongjiang and Anhui provinces, held memorial events ahead of the Qingming Festival, which fell on Friday, and they also recited the pledge of joining the police, the statement said.

In commemoration of the officers, chinapeace.gov.cn, a news website affiliated with the Commission for Political and Legal Affairs of the Communist Party of China Central Committee, released a 20-minute-long video online recently, titled "Five Letters to Heaven."The video, featuring five women who lost their husband, was widely circulated on Sina Weibo, with nearly 35 million views as of press time. The video was clicked on more than 1.7 million times on short video app Douyin. Netizens paid their respects to the fallen heroes. "We thank them for their efforts. We won't have stability without them," one netizen posted.In 2018, 301 police officers in public security departments and 141 auxiliary police officers lost their lives, and more than 12,000 police officers were injured while on duty, the MPS said on its Weibo account. Beijing Public Security Bureau has engraved 363 names of police officers on the martyrs wall so far. The bureau also paid their respects to the martyrs by publishing a list of their names and photos on Friday.  In 2017, 361 police officers across China lost their lives while on duty, among whom 246 died of sudden death because of overwork, accounting for 70 percent of the total, the Beijing Youth Daily reported in April 2018. According to statistics, the average age at which auxiliary police workers died was 43.5 years old, the report said.The MPS data showed 17 police officers from Northwest China's Xinjiang Uyghur Autonomous Region lost their lives in the line of duty in 2018, while 25 officers lost their lives in 2017.  Efforts to protect policePolice officers are essential to safeguard social security, analysts said. They called for more respect and support measures for police working at grass-roots levels. In a bid to safeguard the legal authority of police officers while performing their duties, a regulation was issued by the MPS in 2018 which came into effect in February 2019.The safety of police officers and their relatives shall not be threatened and their names shall not be slandered as long as law enforcement is conducted in accordance with the law, the regulation said.This is one of the government efforts to protect police officers because of an uptick in violent attacks against the police, acts of defiance against the law, insulting and disturbing the police, said a Saturday report by cpd.com.cn, a news site affiliated with the MPS.At the beginning of 2018, there were a number of physical and verbal assaults on police in Henan, Shandong and Hunan provinces and other places. Between July and August 2018, in two weeks, there were more than 10 incidents of knife attacks, acts against the law and biting of police officers, the report said. The MPS also attaches great importance to the psychological and physical health of police officers. Training and workshops are regularly given to officers. The People's Public Security University of China and other police universities dispatch professional teachers to give lectures on psychological education for local officers, an expert on police study, surnamed Wu, told the Global Times on Sunday. The MPS set up a website on police psychological health in 2004 which can receive and solve psychological inquiries from police officers, the Xinhua News Agency reported. A police officer surnamed Cui in Heze, East China's Shandong Province, told the Global Times on Sunday that it is normal for police officers to work overtime, but the belief in safeguarding the stability of society makes police officers commit to their work. "Even though being a police officer is dangerous and I'm always under pressure, I've never regretted my choice. It was my childhood dream. But I feel sorry for my family, especially my 2-year-old daughter. We are busier in holidays," the 27-year-old police officer said. Wang Hongwei, a professor at the Renmin University of China's School of Public Administration and Policy, told the Global Times that police officers are the main force of safeguarding social security and fighting criminal behavior. The role of a police officer has not changed much since the establishment of the People's Republic of China in 1949, but they have come under heavier pressure in recent years as society develops, Wang said. To further relieve the pressure police officers are under, Wu recommends setting up specialized departments for officers working at the local levels, which should offer a dedicated space for officers to help them decompress from the stress of the job and offer supportive facilities and services.