CHINA China must move to blunt impact of US tax cuts

China must move to blunt impact of US tax cuts 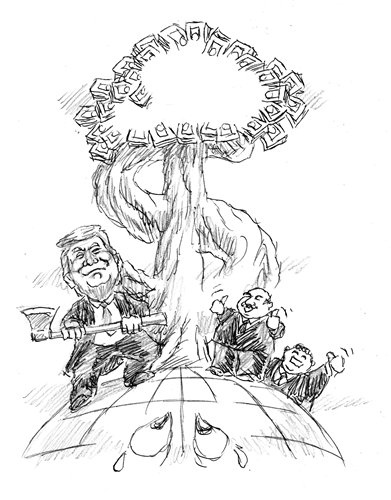 A US tax reform bill in Congress has drawn international attention, and US President Donald Trump has made a major stride toward the goal of tax reform. As the largest economy in the world, any adjustment in US domestic economic policy will definitely have a strong impact on the rest of the world. The unprecedented scale of the tax reform bill shows that it aims to attract capital inflows, and it will have a profound influence on more economies than that of the US. Chinese Vice Finance Minister Zhu Guangyao recently pointed out in a public speech that the spillover of the US tax reform should not be overlooked. China need not fear it but it should take the initiative to minimize the impact.Since the turn of the 21st century, various countries have carried out tax reforms to achieve the policy goal of having a wide tax base through low tax rates. After the financial crisis in 2008, European countries cut taxes and cracked down on cross-border tax avoidance, hoping to keep funds at home and boost their fiscal revenue. This behavior is similar to that of countries that successively raised their tariffs to harm their trading partners during the Great Depression, and it is likely to spark a tax war around the world.A global economic crisis may be triggered by the huge tax reform in the US. Once implemented, it is bound to trigger a new wave of tax cuts in countries around the world. Even during the debate over the US tax reform, some major economies have already begun to talk about their own tax cuts. Britain and India have begun to implement plans to cut corporate taxes. Germany and France are also likely to take similar measures in response.As to China, the impact of this tax reform will be unprecedented. In the process of reform and opening-up, the Chinese market has enjoyed an expanding share of the world market, attracting large amounts of international capital for investment, with reinvested profits to expand production. But after the implementation of US tax reform, a massive withdrawal of US capital is likely to prompt other international money to withdraw from China, putting downward pressure on the nation's economic growth and adding new uncertainty to the Chinese government's easing of capital controls. With the tax reform and the US Federal Reserve Board's balance sheet reduction, the US dollar will be strong in the medium and long term, and the yuan will undergo depreciation.As the largest developing country in the world benefiting greatly from globalization in previous decades, China will bear the brunt of the US tax reform. Thus, China should take decisive measures to safeguard the smooth operation of the national economy.The first and most important step is to improve the management of outbound capital to avoid systemic financial risks. China can impose a gains tax on outbound capital, building a "dam" to prevent massive outflows of cross-border capital in the short term. The tax rate can be adjusted as necessary.Also, a supervision and early warning mechanism for cross-border capital flows should be established to prevent swift capital outflows and thus safeguard the sound development of related industries.Second, China should steadily pursue supply-side structural reforms. After entering the new normal, the biggest problem for China's economy is the urgent need to transform its industrial structure. The concrete manifestation is the overcapacity and excessive taxation of enterprises. In recent years, the Chinese government has taken strategic decisions to vigorously promote supply-side reform, and it has achieved initial success. Along with the opportunity of blunting the impact of the US tax reform, we can push forward the supply-side structural reform to benefit more industries and comprehensively increase the total factor productivity so as to enhance China's core competitiveness.The most important point is that we must manage our domestic affairs and maintain our strategic strength. China must improve its planning and distribution capabilities in the global market, strive for pricing power, build a comprehensive national capital market and upgrade our capacity to mobilize the world's resources so we can make the yuan more globally competitive and attract international capital to China. In this way, we can achieve steady economic development.