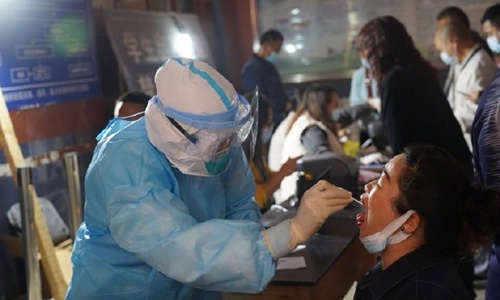 The China-Myanmar border city of Ruili in Southwest China's Yunnan Province launched citywide testing on Wednesday and de facto lockdown after the city reported new COVID-19 cases, putting it under the spotlight once again, six months after a wave of cases hit in September 2020.

The Yunnan provincial health authority announced that from 12:00 am to midnight on Tuesday, six new confirmed cases and three asymptomatic carriers were recorded in the city, four of whom are Myanmar nationals.

Ruili has been conducting citywide nucleic acid testing since 8 am on Wednesday to ensure that no one is left out. The cost of the tests will be borne by the government, says an announcement issued by Ruili's anti-epidemic guiding group.

All residents in the city must quarantine at home for a week and will not be allowed to go out without a special reason, says the announcement, noting that all business premises except supermarkets, pharmacies and farmers' markets will be closed.

The city found one COVID-19 positive case during its routine nucleic acid testing for key cluster people on Monday, and eight positive cases through follow-up testing of close contacts.

Details of the confirmed cases and their movements have not yet been released.

Ruili conducted citywide nucleic acid testing in September 2020 when a previous wave was caused by asymptomatic stowaways from Myanmar.

The city said on Wednesday that it was launching a closed-down management of the Jiegao port community, and that it was banning people and vehicles from passing along the Jiegao bridge, which links the two countries. Jiegao is a township in Ruili bordering Myanmar.

A local citizen surnamed He told Global Times on Wednesday said that he had received a nucleic acid test on Wednesday morning.

"Ruili's urban area is relatively safe… The surrounding area is screening people who have been to the Dehong where rumors said smugglers cross the border caused the infections," He said. He became one of the first people to be tested as he had been to the border area two days earlier.

However, the "smugglers" were yet confirmed by local government.

The city will severely crack down on illegal border crossings and anyone who organizes or assists them, says the city's announcement. Residents should consciously fulfil their legal obligations and cooperate with and support COVID-19 nucleic acid testing, it said.

Some observers said that given the frequent exchanges across the border, the local government could consider prioritizing vaccinations for border residents.