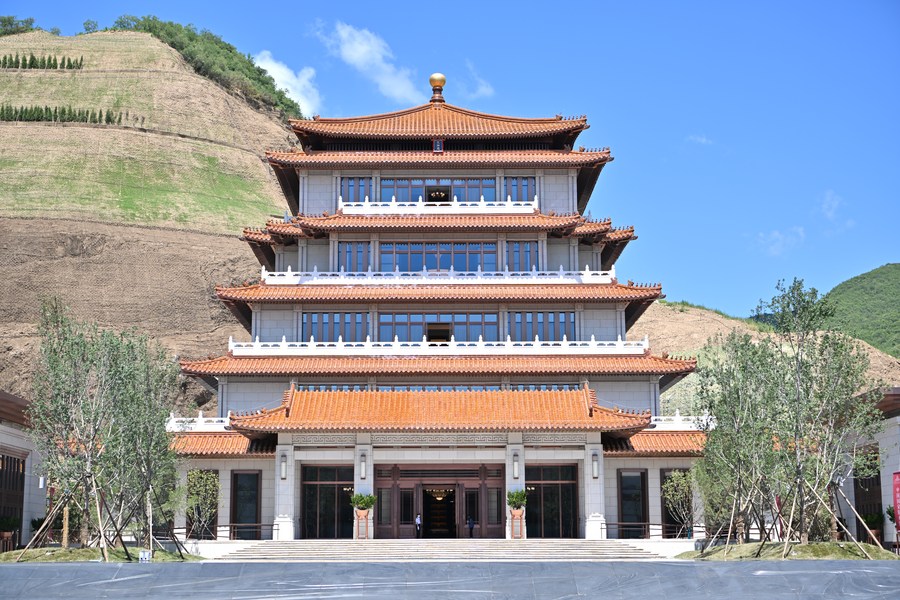 Photo taken on July 23, 2022 shows a view of the National Archives of Publications and Culture in Beijing, capital of China. (Photo: Xinhua)

The China National Archives of Publications and Culture - consisting of headquarters in Beijing and branches in three major Chinese cities - officially opened on Saturday. Viewed as a "seed bank" for Chinese culture, the new facilities will play a huge role in the inheritance and preservation of Chinese civilization.

Located at the northward central axis of Beijing and at the foot of Yanshan Mountain, the headquarters of the institute in Beijing has reserved more than 16 million copies of historical tests and tens of thousands exhibits across 10 major categories, the Beijing Daily reported on Saturday.

Historical development of China and the evolution of Chinese civilization are the main themes of the exhibition at the Beijing headquarters, with cultural relics such as stamps, ancient currency, and Terracotta Warriors and alike among other exhibits that can be seen.

Besides the exhibition of Chinese cultural relics, visitors can also enjoy the historical contexts that review the great rejuvenation of the Chinese nation and some 2,000 copies of classic Marxist texts that display the glorious course of the Sinicization of Marxism.

Chinese analysts reached by the Global Times believe the project will have a major impact on the inheritance of Chinese culture and the preservation of the vast quantity of Chinese texts created since writing began in China.

Besides preserving and passing on culture, the archives will also strengthen Chinese people's cultural confidence, present a strong cultural image and promote dialogues among the world's civilizations, analysts said.

The central location in Beijing will take the lead in coordinating national publication resource planning, while the three branches will gather and cover publication resources in different regions on the local level, said Wu Xiaotian, leader of the planning and implementation department for the institute's headquarters, according to The Paper.

Unlike the Beijing headquarters that stores some of China's most notable cultural legacies, the Xi'an branch focuses in particular on China's Northwest culture, known for the cosmopolitan Tang Dynasty (618-907), while the Guangzhou branch zeros in on China's Lingnan culture, which encompasses iconic heritages such as Cantonese Opera. Hangzhou assumes the responsibility of preserving Jiangnan culture, which encompasses the eastern part of China.

All three branches have multiple sections that serve as not only exhibition halls, but also libraries, archives and art museums.

The Xi'an branch holds an estimated 2.09 million copies of historical texts and 160 terabytes of digital resources. The Guangzhou branch covers an area of 246,900 square meters and its Wenqin Pavilion can store about 2.65 million texts. While the Hangzhou complex, made up of 13 units, has received a total of 1 million important texts such as The Communist Manifesto in various languages donated by local bureaus, government offices, and private collectors.