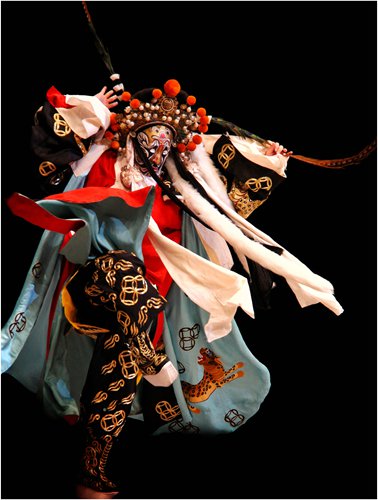 A scene from The Monkey King and The Leopard  (Photo: Courtesy of Sinolink Productions)

The China National Peking Opera Company is bringing two of the world's finest Peking Operas to Sadler's Wells Theatre in London on October 19 and 20.Famous opera stars Yu Kuizhi and Li Shengsu will lead a troupe of 65 performers to bring to the stage The Emperor and the Concubine, a beautiful love story involving the Tang Dynasty (618-907) Emperor Xuanzong (685-762AD), and The Crossroads Inn and The Monkey King & The Leopard, a double bill featuring mime and martial arts.Centuries-old story"This is the fourth consecutive year that the China National Peking Opera Company has contributed to culture exchange between China and the UK by putting on shows in London," Xiang Xiaowei, minister counselor for culture at the Embassy of China in London, said at the opening ceremony held at the British Library on Wednesday.Xiang noted that The Emperor and the Concubine is set in Chang'an, capital of China during the Tang Dynasty and the starting point of the ancient Silk Road. Historically, the Silk Road was a lifeline for exchanges - both in terms of goods and culture - between the East and the West. "It is greatly significant that we still appreciate stories about the ancient Silk Road more than 1,000 years later," Xiang added. A romantic story based on historic events, The Emperor and the Concubine is one of the very few works from Peking Opera Master Mei Lanfang (1894-1961) to be handed down since the 1920s. It showcases perfectly the masterful art of Peking Opera with its elegant and enchanting dance moves, lyrics, music and drama and is representative of the outstanding features of the Mei School of Chinese opera.Kevin Zhang, director of Sinolink Productions, the company that helped bring the troupe to the UK, told the Global Times that the positive reviews the company has seen over the past three years when it comes to Chinese performances have encouraged him to bring more classic shows to British audiences. Zhang said he was amazed that audiences in London were not only impressed by the singing, dancing, acrobatics, and elaborate costumes and make-up on display, but were also able to enjoy the story and plot as well. Zhang recalled that when The General and the Prime Minister was performed in London two years ago, one member of the audience told Zhang that he was particularly impressed by how the character of the General drove the plot forward through the tiny movements of his hat.Behind the curtainTo help the audience better understand the Chinese performances, Sinolink Production have decided to bring them backstage this year by hosting a series of workshops focusing on the many traditions, mysteries and artistic disciplines that make up the captivating art form.  Interactive workshops and short performances were held at the Oxford Ashmolean Museum and The British Library over the weekend to explore and explain the traditions that lie at the heart of Peking Opera. Additionally, a prestigious panel of renowned artists from China, the US and the UK - including actress Lisa Lu from Crazy Rich Asians, which is set to hit UK cinemas in this month - will also gather to discuss their experiences working in the performing arts of different cultures over the years.Sitting down with the Global Times, actress Li Shengsu encouraged younger people in London to come watch The Crossroads Inn, a short martial arts play famous for its humour and an elaborate "fight in the dark" scene.In addition to English subtitles being used throughout the performance, the troupe will also provide a brief introduction to the stories and point out some of the highlights that audiences should look for in the show's program. The performances have been condensed from their original length into a two-and-a-half hour show that includes an intermission. Peking Opera is a magnificent blend of countless theater conventions. It is stagecraft with a vibrant vocabulary steeped in tradition that tells ancient stories about love, ghosts, warriors and emperors through a blend of drama, poetry, music, mime, acrobatics and stage fighting.