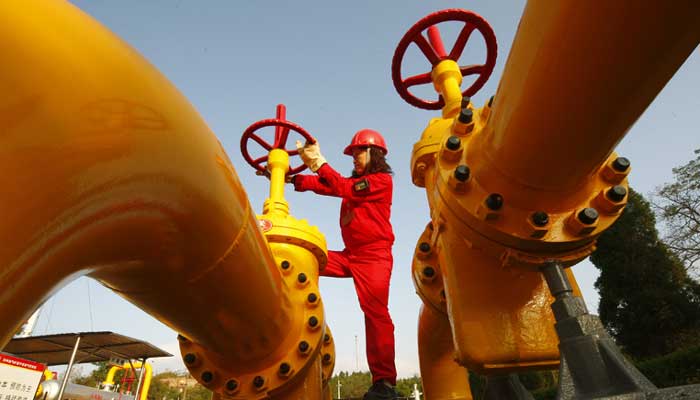 Natural gas has been transported from the west and south of China to help alleviate a natural gas supply  shortage in northern China.Natural gas supplier PetroChina Tarim Oilfield Company, in Northwest China's Xinjiang Uyghur Autonomous Region has transmitted over 20 billion cubic meters of gas to eastern China as of Friday this year, the Xinhua News Agency reported on Saturday.The 20-billion-cubic meters of natural gas can replace up to 26 million tons of coal, according to the Tarim oilfield. The transmission of natural gas increased to more than 19.3 billion cubic meters in 2016 from the previous 350 million cubic meters in 2004. A total of 7.25 million cubic meters of natural gas will also be transported every day starting Saturday from South China's Guangdong Province to ease shortages in northern China, said Xinhua.According to Guangdong Natural Gas Grid, the natural gas jointly provided by PetroChina Company Limited and China National Offshore Oil Corporation will meet the demands of daily use and heating for more than 1.5 million households in northern China.That number is likely to reach 9 million per day with upgraded facilities, Xinhua reported. "The international supply of natural gas is sufficient, but natural gas suppliers in China had relatively low expectations toward the demand of natural gas this year," Lin Boqiang, director of the China Center for Energy Economics Research at Xiamen University, told the Global Times.The northern part of the 3,371-kilometer natural gas pipeline, linking China and Russia has begun construction, according to China National Petroleum Corporation. Upon completion, the pipeline will provide China with 38 billion cubic meters of natural gas from Russia annually, the Xinhua reported. The Ministry of Environmental Protection (MEP) dispatched 1,678 inspectors to check the heating shortage problem in northern China from Friday to Sunday. The inspection covers Beijing, Tianjin, and 26 other cities in the provinces of Hebei, Shanxi, Shandong and Henan, where coal had been banned from providing heating. The MEP examined whether residents in those regions are given proper and stable electricity, natural gas and heating. The notice comes after reports said many regions were suffering from a shortage of electricity or natural gas this winter due to the delayed construction of heating facilities.Yao Qiang, a former director of Tsinghua University's Department of Thermal Engineering, said the heating problems should not simply be blamed on the MEP's campaign to ban the use of coal for heating. Natural gas used by industries and electricity generation also increased faster than expected, Yao said, according to a statement sent to the Global Times by the MEP.  According to China's 13th Five-year Plan (2016-20) on energy development, the consumption of domestic natural gas is expected to increase to 10 percent of overall energy consumption by 2020. Lin noted China should increase its domestic natural gas supply annually as the natural gas demand in the future will be huge.