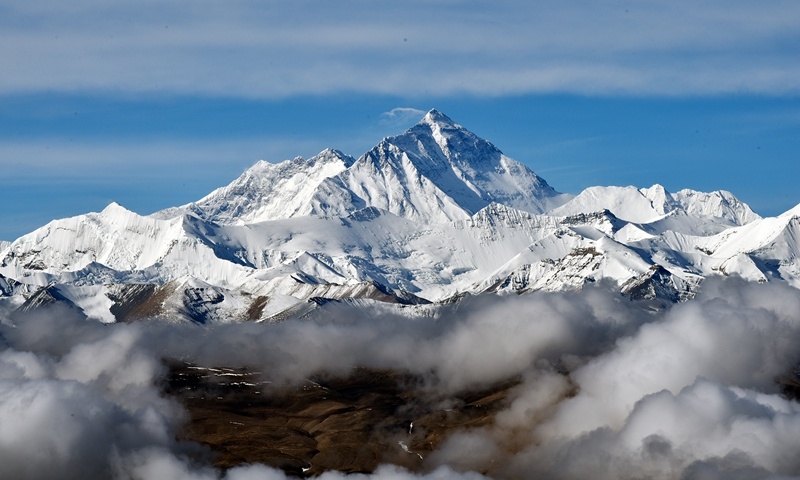 China and Nepal, the two countries that Mount Qomolangma straddles, are expected to jointly announce a unified result for the height of the mountain, more commonly known as Mount Everest, on Tuesday, settling years of debate over the three-meter difference that the two neighbors have on the world's highest peak.

Padma Aryal, Nepal's minister for land reform and management, said that China and Nepal will announce the height on Tuesday, according to local newspaper The Kathmandu Post.

Although the Chinese Ministry of Natural Resources declined to reveal details of the joint announcement as of Monday afternoon, sources close to the matter told the Global Times that there would be a statement on Tuesday in Beijing.

The previous calculation by Chinese researchers from a 2005 survey stands at 8,844 meters, while Nepal said it was a little taller, at 8,847 meters.

The three-meter gap, to be closed in the upcoming announcement, was caused by the difference in measuring methods, with China calculating the "rock height" underneath the snow, while Nepal measured the "snow height" which included the snowcap.

Earthquakes that took place in the nearby region have also affected the height of the mountain, experts noted. But the extent of the impact the 2015 Nepalese earthquake had on the mountain's height, with its epicenter 200 kilometers away, has not been verified in the international community.

Reaching a consensus on the issue reflects the two countries' mutual respect and willingness to extend cooperation by promoting information sharing, observers noted on Monday.

Mount Qomolangma can be seen as a symbol of friendship between the two countries. Rather than surveying the height separately, China and Nepal agreed on a unified result, similar to the mountain's area division.

Analysts noted that the result could also give great value to the study of the Earth's geodynamic plate motion. Data such as peak snow depth, weather and wind speed will provide first-hand information for research on glacier monitoring and ecological environment protection.

The Chinese measurement team made another successful journey to the peak of Mount Qomolangma on May 27, following a joint statement signed in 2019 by the two countries saying they would conduct scientific research and reach a consensus on the stature of the mountain during Chinese President Xi Jinping's visit to Nepal's capital city Kathmandu.

5G communication technology was used, with China's telecom giant China Mobile and Huawei providing end-to-end solutions during their ascent. Many of China's homegrown new technology applications, including the BeiDou Satellite Navigation System, were also adopted to ensure that the country's latest trip to re-measure the height of Mt Qomolangma went smoothly.

Nepal lifted its seven-month ban on climbers last month after suspending incoming international flights in March due to the COVID-19 pandemic, which had a massive economic impact on the country, especially its tourism sector, Bloomberg reported.

Mountaineers must submit a negative nucleic acid test result taken within 72 hours upon arrival, and are required to quarantine in designated accommodation for seven days before heading to the mountains.

Nepal is home to more than 320 mountains that are open for tourist expeditions, and eight of the world's 14 tallest mountains. But Mt Qomolangma is the main attraction, bringing in more than $300 million in revenues last year.