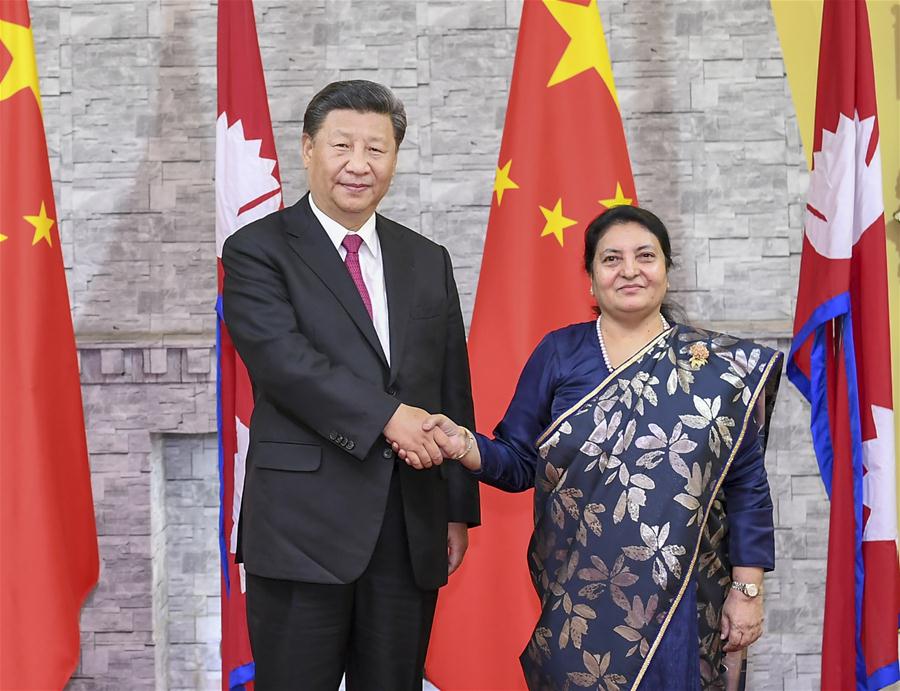 KATHMANDU, Oct. 12 (Xinhua) -- China and Nepal agreed on Saturday to upgrade their relations to a strategic partnership of cooperation featuring ever-lasting friendship for development and prosperity.

The agreement was made and announced when Chinese President Xi Jinping met with his Nepali counterpart, Bidya Devi Bhandari.

Xi said that he came to Nepal as scheduled after Bhandari warmly invited him for a visit this year when they met in Beijing in April. He also agreed that as what Bhandari has said there is only friendship and cooperation between China and Nepal.

Xi said that he saw sincere smile on the faces of the Nepali people and felt the friendship from the deep of their heart toward the Chinese people, adding that he felt once again that the China-Nepal friendship enjoys broad consensus and solid foundation in Nepal.

The two peoples have shared weal and woe, and set an example of friendly exchanges between neighboring countries, said Xi, adding that he hopes to carry forward the traditional friendship and take the bilateral relationship to a new and higher level via the visit.

Xi called on the two sides to consolidate the political foundation of bilateral ties, and set the building of a community with a shared future as a long-term goal for the development of China-Nepal relations.

The Chinese president appreciated Nepal's firm adherence to the one-China policy, saying that China will as always support Nepal in safeguarding its national independence, sovereignty and territorial integrity.

The two sides should build an all-round cooperation pattern, carry out the construction of a trans-Himalayan connectivity network, and expand exchanges and cooperation in various fields, Xi said.

Noting that China just celebrated the 70th anniversary of the founding of the People's Republic of China (PRC), Xi said that China will continue to deepen reform and expand opening-up so as to advance high-quality development.

A stable, open and prosperous China will always be a development opportunity for Nepal and the rest of the world, the Chinese leader added.

For her part, Bhandari warmly welcomed Xi's state visit to Nepal and congratulated again on the 70th anniversary of the founding of the PRC, saying that Nepal is willing to learn from China's successful experience of development.

Bhandari said she believes that the Chinese people, under the leadership of the Communist Party of China, will realize the Chinese Dream of national rejuvenation, which will definitely bring benefits to Nepal, and help promote regional peace, development and prosperity.

Noting that Xi is the first Chinese president to visit Nepal in 23 years, Bhandari said the visit is of historic significance, adding that the two countries' announcement of establishing a strategic partnership of cooperation will consolidate the two countries' traditional friendship, enrich the contents of bilateral ties and usher in a new era for the Nepal-China relationship.

Nepal, she said, respects China's sovereignty and territorial integrity and will never allow any anti-China force to engage in anti-China activities in Nepal, adding that Nepal is willing to actively participate in the Belt and Road Initiative and the building of a trans-Himalayan connectivity network.

Nepal is the second leg of Xi's two-country trip, which also took him to the southern Indian city of Chennai for an informal meeting with Indian Prime Minister Narendra Modi.