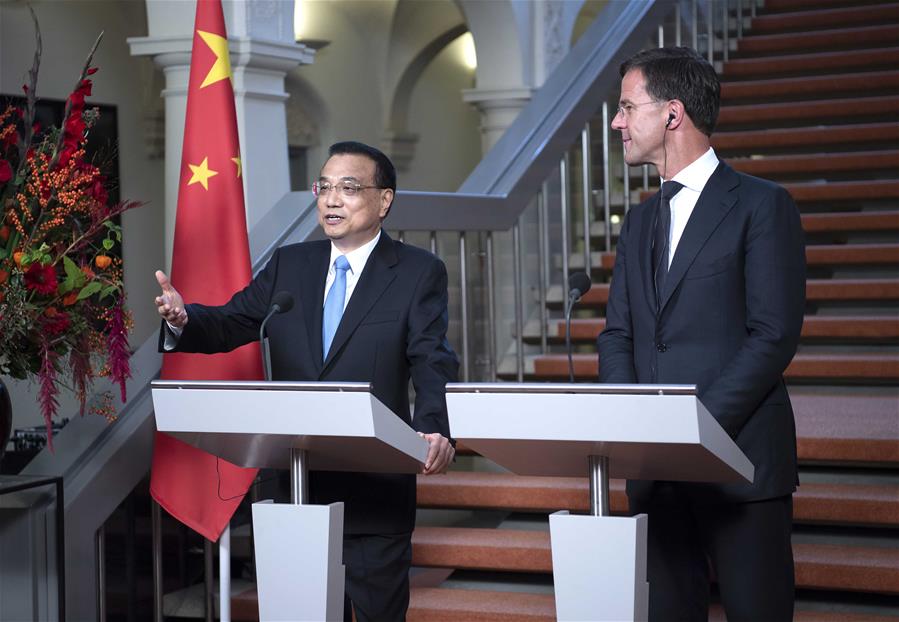 THE HAGUE, Oct. 15 (Xinhua) -- China and the Netherlands Monday agreed to further enhance cooperation on common challenges faced by humanity such as climate change and an ageing population.

The pledge came as Chinese Premier Li Keqiang and his Dutch counterpart, Mark Rutte, jointly met here with the press during Li's official visit to the European country starting Sunday.

Li said climate change and an ageing population are common challenges for both China and the Netherlands though the two countries may differ in situation, degree and capability in dealing with the issues.

"China stands ready to enhance cooperation with the Netherlands in these areas," Li told the press.

He said China would like to participate in the Global Commission on Adaptation proposed by the Netherlands and other parties to show its firm adherence to the Paris Agreement on climate change.

It is also China's internal need during the process of its economy's upgrading and transition, he added.

The Global Commission on Adaptation, featuring the Netherlands as a key convener and to be overseen by the former Secretary-General of the United Nations Ban Ki-moon, co-chair of the Bill & Melinda Gates Foundation Bill Gates, and World Bank CEO Kristalina Georgieva, will be launched on Tuesday in The Hague.

This commission will emphasize the importance of climate adaptation acts as a catalyst for international cooperation to make the planet more existent to the immediate effects of climate change, according to Rutte.

The two sides also talked about the issue of an ageing population as Li said that China is willing to discuss with the Netherlands to open up its senior service industry.

Li arrived here Sunday for an official visit to the Netherlands, the first by a Chinese premier in 14 years. It is also Li's first trip to the country as the Chinese premier.

During his three-day stay, Li will meet with Dutch King Willem-Alexander. He is also set to visit a hi-tech exhibition and address a business forum in The Hague on Tuesday.