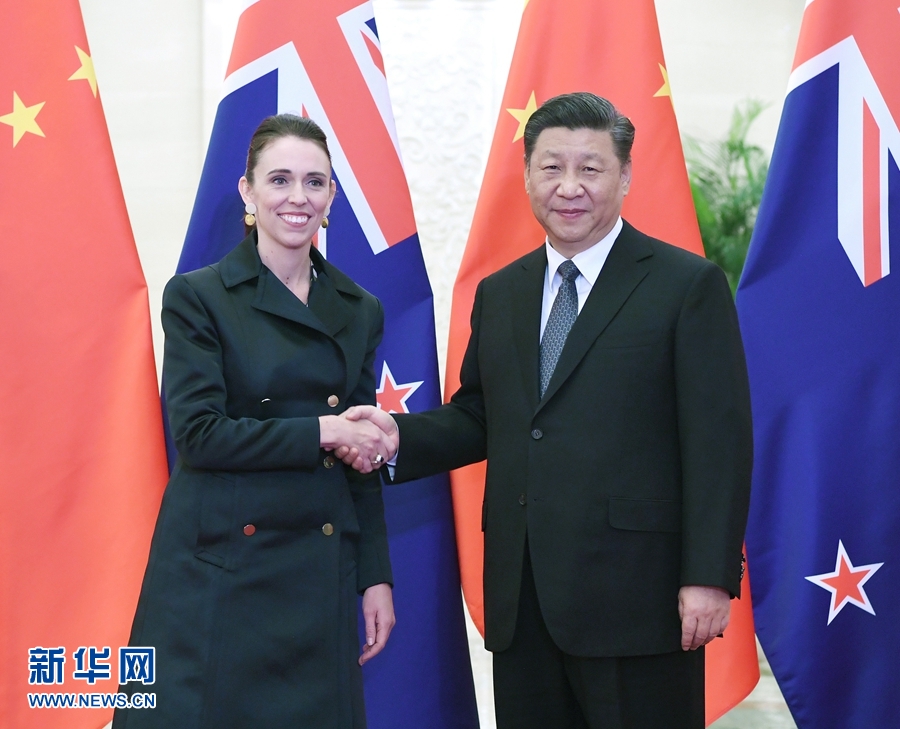 During their meeting at the Great Hall of the People, Xi first expressed sincere condolences to New Zealand for the deadly shootings in Christchurch two weeks ago, saying that Ardern's visit to China at a moment that her country was facing a special important agenda showed the great importance she and the New Zealand government attached to bilateral ties.

China has always viewed New Zealand as a sincere friend and partner, Xi said, adding that China-New Zealand ties, established 47 years ago, had always been at the forefront among relationships between China and Western countries.

He called on both countries to continue to deepen the bilateral comprehensive strategic partnership based on the principles of mutual trust and mutual benefit.

China stands ready to work with New Zealand to maintain the bilateral ties as a "front-runner" in relations between China and Western countries, Xi said.

Under the new circumstances, the two countries need to further deepen mutual understanding and trust and respect each other's core interests and major concerns in the spirit of openness, inclusiveness and seeking common grounds while reserving differences, he said.

Xi called on both sides to expand substantial cooperation.

China will support capable enterprises to invest in New Zealand, while New Zealand needs to provide a fair, just and unbiased business environment for Chinese enterprises, he said.

He also called for the speeding up of negotiations on the upgrade of the bilateral free trade agreement.

China welcomes New Zealand to participate in the Belt and Road construction, Xi said, encouraging both countries to enhance cooperation in international affairs, jointly strive for an open world economy and uphold multilateralism and multilateral trading.

China attaches importance to climate change and is willing to work with New Zealand to promote the sustainable development of Pacific island countries, the president said.

He also encouraged both countries to enhance exchanges in areas including education, culture, youth and science and technology, and to host a successful China-New Zealand Year of Tourism in 2019.

Ardern thanked Xi for extending condolences over the deadly shooting incident, and expressed condolences for the loss of life in a chemical plant blast in Jiangsu Province in late March.

Noting the long history of friendship between New Zealand and China, Ardern said her country attached great importance to ties with China and was proud that the country led in many areas in developing ties with China.

Ardern said she agreed with Xi's comments on the relations between the two countries, and looked forward to strengthening the New Zealand-China comprehensive strategic partnership and deepening bilateral economic and trade cooperation and people-to-people exchanges after this visit.

She reiterated New Zealand's adherence to the one-China policy.

New Zealand pursues an independent foreign policy and firmly supports multilateralism and free trade, Ardern said, adding that the country had long supported the Belt and Road Initiative and participated in the Asian Infrastructure Investment Bank.

She said New Zealand would send a high-level delegation to the second Belt and Road Forum for International Cooperation to be held later this month in Beijing.

New Zealand is ready to enhance cooperation and coordination with China on major international issues including climate change, the prime minister said.

Ardern arrived in Beijing on Sunday for a two-day visit to China. This is her first official visit to China since becoming New Zealand's prime minister in October 2017.