At the border area between China and North Korea, a bus, which also transports goods, has run silently for more than 40 years, linking the border city of Dandong in Northwest China's Liaoning Province and the North Korean city of Sinuiju. 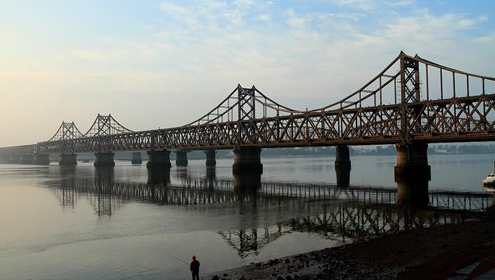 The bus departs from Dandong and Sinuiju every day. Since the China-North Korea Friendship Bridge has only one lane, the two sides create morning and afternoon schedules to avoid running into each other, Zhang Runfu, manager of the Hongxiang International Travel Agency in Dandong, told the Global Times on Sunday.

Netizens were amazed by the idea of "going abroad" on bus when the information made the rounds on social media. But this is not new, an employee of the Dandong Public Transportation Co. told the Global Times. "The line has never been suspended since the 1970s. It has witnessed changes on both sides of the Yalu River," she said. But trips to North Korea are more complicated than hopping on the bus with a 20 yuan ($3) bill. Passengers must go through customs procedures before boarding the bus, said the employee.   "People who ride the bus do so for family reunions or business. The number of passengers varies from a handful to 20 people," Zhang said.  Dandong residents with a specially issued border resident certificate can take the bus several times a year, as others with passports and visas, even not banned from riding, face stricter checks if no company picks them on the North Korean side, according to Zhang. The bus is mainly used for transporting goods when freight trucks were scarce. A smaller bus runs the line since trucks gradually took its role, the Dandong government said on its WeChat account.  On Saturday night, Dandong put on a light show on the bridge that line 301 drives through, when North Korean leader Kim Jong-un's train reportedly passed the city on its way to Vietnam for his second meeting with US President Donald Trump.