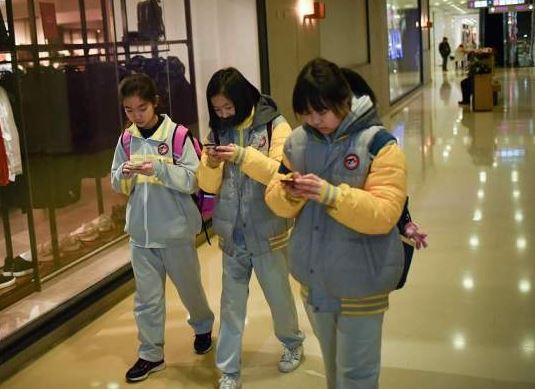 Students use their mobile phones as they walk through a mall in Beijing. (File photo: VCG)

China is now home to 169 million Internet users under the age of 18, according to the results of research by the China Internet Network Information Center and the Communist Youth League.

The rate of Internet penetration among people aged 6 to 18 has reached 93.7 percent, excluding people in that age range who are outside the education system. Over 90 percent of them use mobile phones to access the Internet, and about 70 percent own their own phone.

Over 85 percent surf the Internet for educational purposes. Two-thirds – 68.1 percent – use it to access online music streaming service, and 64.2 percent use it to play online games. Just under 60 percent use the Internet to chat, and over 40 percent watch short videos online.

The report is urging better protection for minors online. The proportion of young people who have experienced cyber bullying was 15.6 percent and 30.3 percent had encountered illegal and inappropriate information.