CHINA China nudges up its commitment toward carbon neutrality, here's how

China nudges up its commitment toward carbon neutrality, here's how

In order to fulfill the commitment of hitting the peak of carbon emissions by 2030 and carbon neutrality by 2060, China needs to promote the balance between economy, energy, and environment, and optimize and accelerate the construction of a clean and efficient energy system, stressed experts at the Global Forum on Energy Security on Monday. 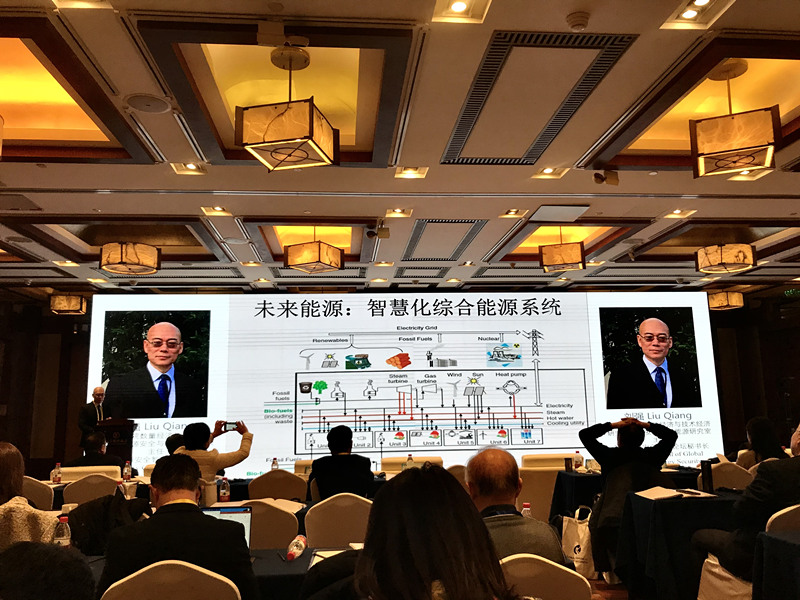 Liu Qiang, secretary-general of the Global Forum on Energy Security, presents the report of "Energy Transition in the Perspective of Carbon Neutrality" in Beijing, December 14, 2020. /CGTN

"The idea of reducing carbon emission is not new," said Li Ping, director of the Institute of Quantitative & Technology Economics of the Chinese Academy of Social Sciences, in his keynote speech at the Forum. "But the fact that China is willing to specify our commitment shows our renewed understanding and commitment in fighting global warming."

The Forum was co-hosted by the Institute of Quantitative & Technology Economics and the Presidium of Academic Divisions of the Chinese Academy of Sciences. During the Forum, the institute released its report "Energy Transition in the Perspective of Carbon Neutrality: Choices and Paths - A Future Energy System with Carbon Peak in 2030 and Carbon Neutrality Targets in 2060".

The report elaborated the current challenges in achieving the goal of carbon neutrality in China. First of all, coal accounted for about 58 percent of China's primary energy consumption in 2019. Second, the current energy solutions have no carbon reduction or carbon fixation effects. Third, the cost of various technologies to achieve carbon neutrality remains high. 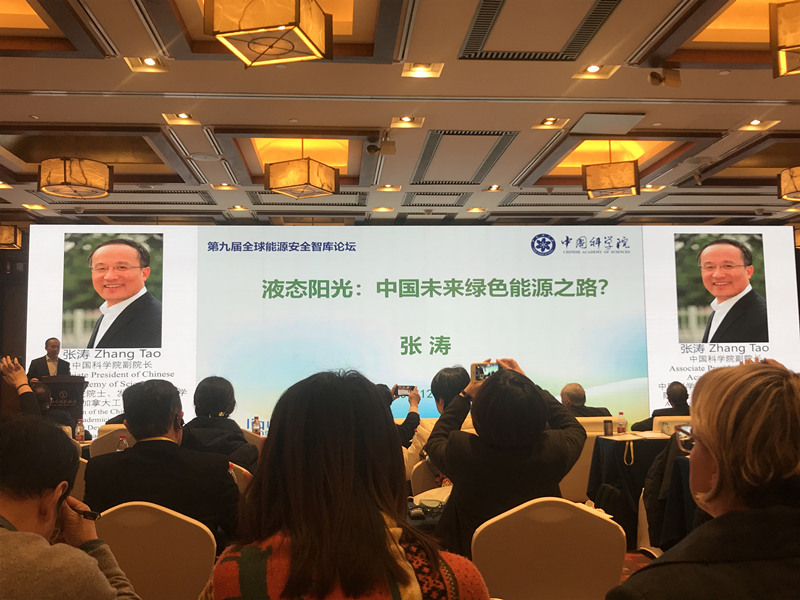 Zhang Tao, vice president and academician of the Chinese Academy of Sciences, presents the model of "Liquid Sunshine" during the Global Forum on Energy Security in Beijing, December 14, 2020. /CGTN

Experts and entrepreneurs around the world attended the event, presenting solutions for China's energy optimization foray.

"Liquid Sunshine" is one of those resolutions presented during the Forum. According to Zhang Tao, vice president and academician of the Chinese Academy of Sciences, his model of "liquid sunshine" is essentially a technique turning water and carbon dioxide (a major greenhouse gas) into methanol fuel harnessing solar power.

"In order to achieve the goal of carbon neutrality, it is necessary to accelerate the construction of a clean, low-carbon, safe and efficient energy system, break the 'walls' between different types of energy, and integrate various energy varieties organically," Zhang added.

Carbon neutrality – or net-zero emissions – means that emissions are balanced by absorbing an equivalent amount from the atmosphere. To achieve that, China has a huge carbon emission burden to shake off. But the burden can be lighter than the world anticipated, as China's carbon emission data referred in the Carbon Emission inventory is actually about 15 percent higher than the real one, Zhang told CGTN.

China's carbon emissions data released by scientific research and government agencies in Western countries are mainly estimated based on the experience of developed countries, which can be biased.

"For example, we used to consider the annual carbon absorption as a set number, and calculate the net carbon emission data based only on the changes of emission data. However, because of China's efforts to add greenery to the surface of the planet, the carbon dioxide removal from the atmosphere in China has actually increased over the years," Zhang told CGTN. "By utilizing the satellite remote sensing monitoring technology and so on, scientists were now able to give a more precise number of the net carbon emission number."

According to a report released by Tsinghua University, which was published by Nature, China's carbon emission number from 2000 to 2013 has been cumulatively overestimated by about 10.6 billion tons, which is nearly 100 times of what all the developed countries in the Kyoto Protocol frame have actually produced since 1994.

The first group of countries, France, UK and Germany, have already reached their carbon emission peak in the 1970s, which means they have decades to prepare their people, industries, technologies and economies into a carbon-neutralized society by 2050 as promised.

Based on the past experience, the carbon emission curve tend to hit a plateau before the emission number starts to drop. For European Union, the plateau lasted for two decades. 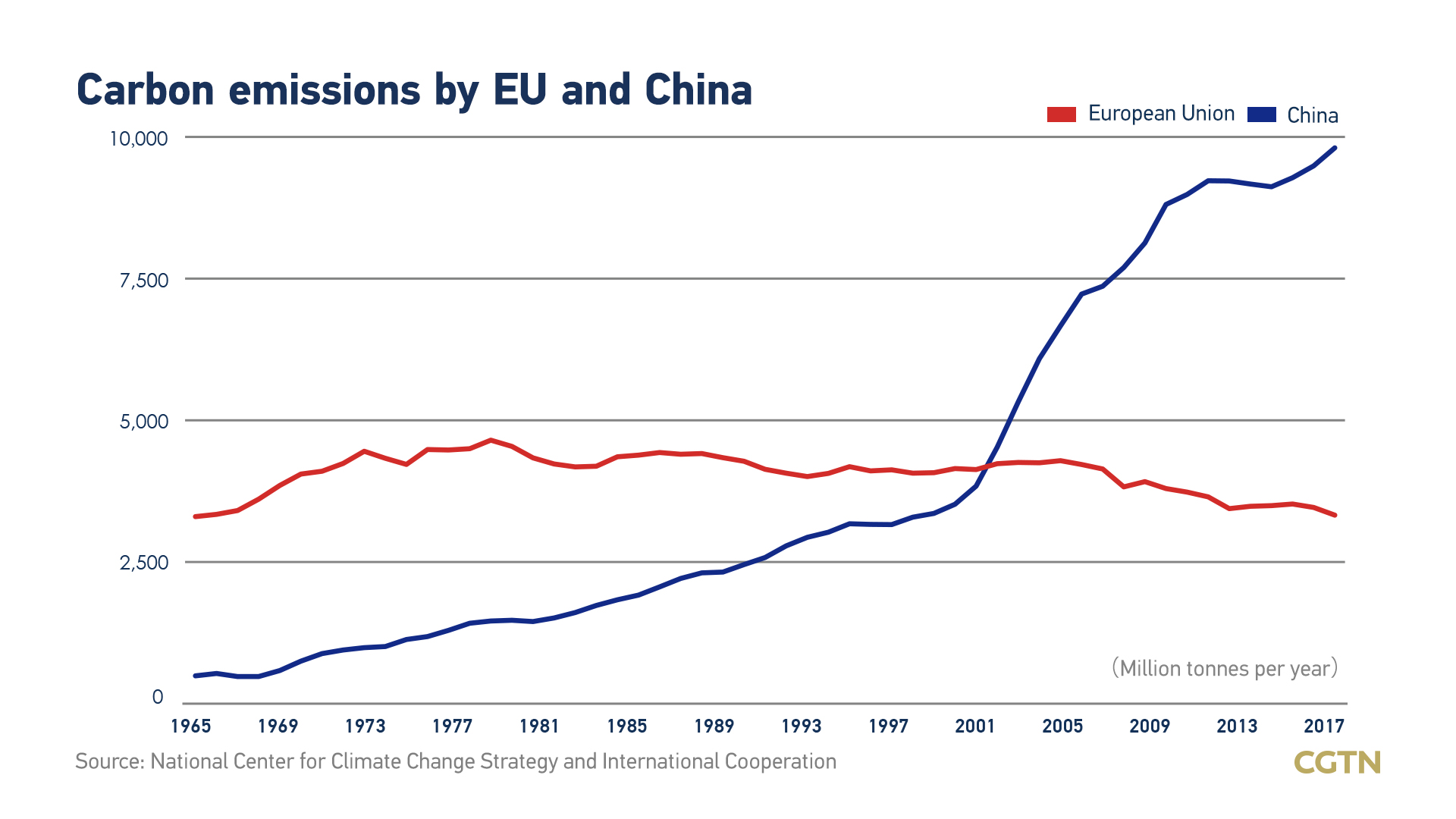 Although China has a comparatively strained time schedule, it is still feasible to achieve the goal, Li said.

"We have done the math. By the time they achieved their carbon emission peak, the GDP per capita was within the 10,000 to 20,000 US dollars range. And the proportion of their secondary sector (manufacturing sector) represents around 40 percent of the economy," Li said.

"This means China is ready in terms of our human wealth level and industrial construction," Li concluded. More importantly, although China has a much shorter time-frame in terms of reaching carbon neutrality, "we also enjoy the fact that the technology now is much advanced than it was in the 1970s."

"And I think the coronavirus pandemic underlines the importance of global governance more than ever," Li added. "Similar to tackling a pandemic, international collaboration is one of the most important elements to combat climate change."