China has ordered the US to shut its Consulate General in Chengdu, Southwest China's Sichuan Province, in retaliation for the US asking to close China's Consulate General in Houston, the Chinese Foreign Ministry said on Friday, which analysts have called "an equivalent and reciprocal countermeasure," reflecting the core principle of diplomatic dignity as well as China's efforts in taking the quick escalation of conflict between China and the US under control.

The order by the Chinese side came after the US abruptly asked China on Tuesday to close its Consulate General in Houston within 72 hours, which is a unilateral political provocation by the US side against China and a grave violation of international law and the basic norms governing international relations, which seriously harms bilateral ties. China would take countermeasures that will cause the US "real pain," according to observers.

Closing the US Chengdu consulate is a legitimate and necessary response to the US sudden closure of Chinese consulate in Houston. The Chinese move is in compliance with international law and basic norms of international relations, as well as diplomatic practices, the Chinese Foreign Ministry said on Friday.

The current situation between China and the US is something China does not want to see, and the responsibility rests entirely with the US, the ministry said, noting that China once again urge the US to revoke its decision to create necessary conditions for the return of bilateral relations. 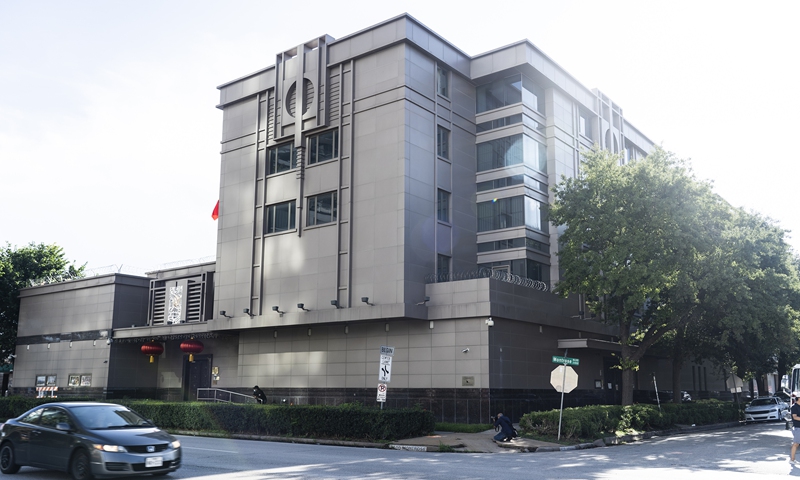 Compared to the US consulates in East China's Shanghai and South China's Guangdong Province, the consulate in Chengdu has a relatively smaller business volume, reflecting that the Chinese side is taking a restrained approach to lower the impact, Li Haidong, professor at Institute of International Relations, China Foreign Affairs University, told the Global Times on Friday.

The diplomatic spat between the US and China has quickly escalated as some reports hint the US may close more Chinese consulates. "Unlike Washington that uses tactics to further flare up tensions, Beijing has been trying its best to remain restrained," Li said.

Some speculation had earlier emerged that China might close down US Consulate General in Wuhan, Central China's Hubei Province, as retaliation for the closure of China's Consulate General in Houston. However, that would be an underestimation of China's will in taking "equivalent and reciprocal countermeasure," according to observers.

As part of staff has not returned to the Wuhan consulate, its closure would not be equivalent to US bullying and extreme pressuring tactics, and would be seen as a gesture of showing weakness to the US side.

Lü Xiang, a research fellow at the Chinese Academy of Social Sciences in Beijing, told the Global Times that choosing the US consulate in Chengdu is an equivalent and reciprocal countermeasure as the consulate covers the consular services among the Southwest region of China and its number of employees is almost equal to that of China's consulate in Houston.

"The US is unlikely to make further provocations to close more Chinese diplomatic missions. Choosing the consulate in Houston could help the Trump administration distract the public's attention of the worsening epidemic situation in Texas, a traditional 'red state,' which the Republican party can't afford to lose," he said.

But other Chinese consulates in the US are located in cities like New York and San Francisco, which are in the "blue states" that the Republican can't win, so it would be meaningless for Trump to close more as it won't help him win the election, Lü said.

If the US continues its crazy moves, China can play another card to retaliate; that is, expelling those so-called "diplomats" from the US who are actually CIA agents located in China, especially those in Hong Kong region, Lü noted, adding that this could make the US really feel the pain as its intelligence networks in China, which it has spent decades trying to build, will be closed down. Therefore, it would be so unwise of the US to continue the fight as it will lose more than China.

"Closing the US consulate in Chengdu sent out a clear message: China won't take the first move to sabotage China-US relations, but it will definitely fight back against the US' moves that are 'out of line,'" Shen Yi, professor at the School of International Relations and Public Affairs of Fudan University, told the Global Times on Friday.

Closing consulates and expelling diplomats is a conventional way to go about the strategic games played between major powers and there have been many previous examples in history, according to Chinese observers. "There have also been more serious incidents in the diplomatic field before China and the US; that is, the direct downgrade of diplomatic relations, which is more serious than expelling diplomats," Shen said, noting that the Chinese side has the wisdom and will of fighting this game in accordance to its playbook, and it won't be affected by the American hawks' provocations.

Given the current escalation, Chinese observers believe that the next three months before the US presidential election will be a highly dangerous period for the two countries, and even military conflict can't be ruled out.

"The Trump administration is now taking an 'adventurism' strategy in its China policy, embedded with more uncertainties, as it tries to shift the blame to China for its failed COVID-19 response," Li said, noting that it's also highly dangerous that the whole country's fate has been kidnapped by the election roadmap of certain politicians.

"After the election ends, there will be an adjusting period for the US government to reconsider its China policies; however, the long-term confrontation won't change," Li added.

Ezra Vogel, Professor Emeritus at Harvard University and leading American scholar on East Asian affairs, told the Global Times in an earlier interview that unfortunately, there is a possibility of an armed confrontation between the two countries. "If there is a little scuffle in the South China Sea, it could soon escalate. And if the countries failed to control it, it could be devastating and everybody would lose," he said.

The US consulate in Chengdu, covering consul affairs in several provinces and regions including Southwest China's Tibet Autonomous Region, had attracted public attention for several occasions. It was opened in October 1985 by former US President George Bush, and had been besieged by crowds to protest the US bombing of the Chinese Embassy in Belgrade in 1999.

The consulate in 2012 also became a scene for the incident concerning Wang Lijun, former vice mayor and police chief of Southwest China's Chongqing, who defected and entered the consulate but later left on his own volition.