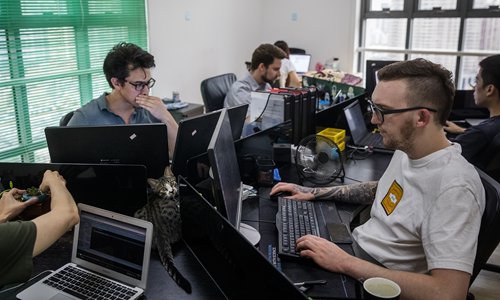 Three young men from the US open a website in Shanghai to buy Chinese products for US customers in 2017. (Photo: VCG)

Video producer and musician Justin Scholar enjoyed his epic moment weeks ago, when he spotted his latest work playing on a huge LED screen in New York's Times Square."It's sort of the American dream to see your name up in lights, right?" said the 25-year-old New Jersey native, still immersed in excitement. "I'd never really cared about my name being that big, but going to New York and seeing the big screens, you always wonder if your work is going to make it up there."The video that helped Scholar fulfill his "American dream" was shot and produced in China, where Scholar is living and working as a media company owner. After taking his first Chinese class back in high school seven years ago, Scholar listed China as a future destination and made his first trip to Shanghai in 2015 through a study-abroad program when he was a student in New York University.Though he had been told what urban life in China was like beforehand, it was still "a far cry" from what he saw with his own eyes, said Scholar. The film and TV major transferred his focus from technical art to traditional arts during the semester in Shanghai, spending most of the time learning ink and wash painting, calligraphy and the Chinese zither called the guzheng.He also fell in love with the city, where he ate a lot of authentic xiaolongbao, or steamed little meat buns, and felt safe walking on the street at 3 am. "Shanghai is an incredibly efficient, modern city," said Scholar. "To have this impeccably accurate and fast metro and to have very clean streets and bright lights at night, and people pouring in by the thousands... that is just a success story of a millennium."At the same time, Scholar felt Shanghai's call for greater business prosperity with foreign participation as the local government "opens its doors, offering new business visas and new incentives for businesses to come," he said.This may explain Scholar's return to Shanghai two years later, when his career at home was already thriving after making commercials for big names such as Coca-Cola and Jaguar. Amid doubts and worries from his parents, Scholar went back to Shanghai on his 24th birthday with an aspiration to launch his own company.Thanks to a combination of luck and talent, he achieved the goal soon with a Chinese friend as his business partner, and the company has already produced some 15 videos for pop icons, fashionistas, and art museums in merely six months. The video that plays in Times Square - a tourism promotional film for Southwest China's Chongqing was the company's first project contracted by a local government in China.Strive elsewhereReflecting on his own story, Scholar encourages more young Americans to explore the outside world to gain a more fulfilling life experience and a perspective that they could never get from where they grow up.He strongly recommends Shanghai and other booming Chinese cities to young entrepreneurs and artists who may not be able to find success in New York City, where costs of living are high and markets are relatively saturated.As a business insider, he has seen rapid growth in music, film and fashion in China, which offers "an incredible amount of opportunities" and incentives to people of various backgrounds."Small businesses are incredibly quickly developing in Shanghai, which is so tempting to any young business that needs to come to China for sourcing or for any kind of collaboration, any kind of scaling," he noted. "You come to China to grow big and to work with bigger audiences, bigger people. It's just a massive country."The brilliance of his Chinese peers impresses Scholar during everyday encounters. "I think the young people in China are incredibly competent. I've never met people who work so hard, and from an artistic background, have such a vivid and creative approach to modern problems and modern styles." Through the thousands he interacts with on a daily basis, he sees a "bright" and "fantastic" future of China.Being aware of the current strained bilateral ties between China and his home country, Scholar sincerely hopes the situation would improve as the world is facing severe challenges such as climate change, where joint efforts from the world's two biggest economies are indispensable.He thinks young people of both countries can play an essential role in promoting bilateral ties by studying in each other's countries and developing "real mutual understanding between youth cultures.""My kids will probably end up speaking Chinese, and a lot of young Chinese people will say, 'My parents studied in the US,'" said Scholar. This could encourage more exchanges of the next generation and gradually break some stereotypical views toward each other by personal experience."I am an optimist. I really like to think that the US and China will develop a very strong relationship," said the young man with a big smile.