CHINA China on behalf of 53 countries expresses concern over intolerance against minorities, migrants at UN

China on behalf of 53 countries expresses concern over intolerance against minorities, migrants at UN

GENEVA, Sept. 24 (Xinhua) - On behalf of 53 countries, China on Tuesday delivered a joint statement to express concern over the growing intolerance against ethnic minorities and migrants at the ongoing 42nd session of the United Nations (UN) Human Rights Council. 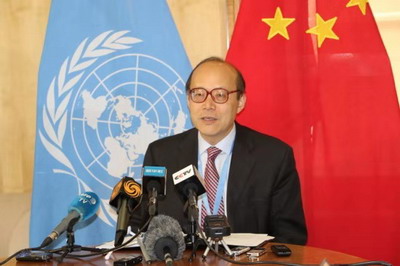 "Some countries have not taken appropriate measures to prevent the resurgence of neo-Nazism and racial superiority exacerbation and put an end to racial discrimination and hate speech," the statement said.

"They even try to justify these manifestations under the pretext of freedom of expression," it added.

Chen Xu, head of Chinese mission to UN at Geneva, stressed that the countries are concerned "when both children and adult migrants are held in detention without due process safeguards, leading to the separation of the children from their families."

"Migrant children could bear scars for life from detention. It is imperative to look after the best interest of children in accordance with the Convention on the Rights of the Child in this regard," he said.

"We call upon the Human Rights Council to pay more attention to the migrants' rights of life, work, health, education and dignity. We urge those countries to fulfill their international human rights obligations, stop policies that violate human rights and fully implement the Durban Declaration and Program of Action," he said.

"We urge them to take credible steps to combat racism, racial discrimination, populism, hate speeches and xenophobia," he added.