CHINA China on its way to 'dual carbon' goals

China on its way to 'dual carbon' goals

The Hangzhou West Railway Station, in the capital of China's Zhejiang province, was recently put into operation. 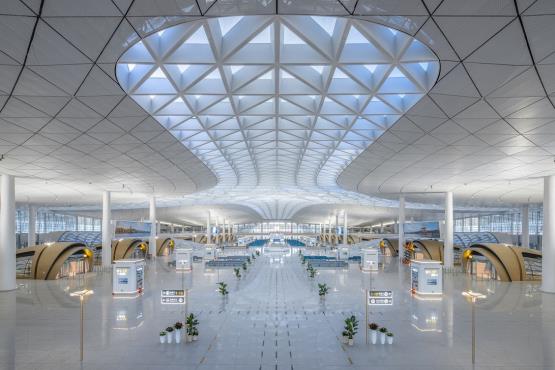 Photovoltaic panels covering 15,000 square meters have been on the station roof, which are expected to generate 2.31 million kilowatt-hours of green power and reduce carbon dioxide emissions by more than 2,300 tons every year.

Sunlight shines on the train station through a gigantic cross-shaped skylight and light-transmitting shading film, and the light intensity in the station is automatically adjusted according to the passenger flow and weather changes by a smart indoor lighting system.

Besides, the roof of the station is covered by heat-resistant films that help block the heat and reduce the energy consumption of air conditioning.

"The station is constructed under the guidance of the green and low-carbon development philosophy. It is rated as a top-level green structure in China," said Du Liqiang from China Railway Construction Engineering Group, the company that managed the station construction,

At the general debate of the 75th session of the United Nations General Assembly, China announced that it would scale up its Intended Nationally Determined Contributions by adopting more vigorous policies and measures. The country aims to have CO2 emissions peak before 2030 and achieve carbon neutrality before 2060.

"Over the past two years, local governments and relevant departments have made concrete efforts, getting off to a solid start on its way to achieve the 'dual carbon' goals," Liu Dechun, an official with the National Development and Reform Commission, told People's Daily.

It’s proved that China has achieved remarkable progress in the green and low-carbon transition of energy.

The country is seeing a higher ratio of green buildings.

It has accelerated the transformation of urban and rural construction, operation and management models, actively promoted green structures and advanced low-carbon upgrading for existing buildings in accordance with urban renewal progress.

As of the end of 2020, the country had completed energy-saving renovation of existing buildings covering a total area of 1.5 billion square meters, and the coverage of newly-built green structures accounted for 84 percent of all the newly constructed buildings last year.

Last year, China manufactured and sold over 3.5 million new energy vehicles (NEVs), ranking first in the world for seven consecutive years. The monthly market penetration rate of NEVs in August this year was 30 percent, up from 2.4 percent in early 2020.

In 2021, all the shipping bills of express parcels have turned electric, and the utilization rate of recyclable transit bags has neared 100 percent. A total of 6.3 million recyclable express delivery boxes were put into use, and 80.5 percent of e-commerce parcels avoided excessive packages.

Besides, the country has also made huge efforts to develop strategic emerging industries, eyeing on new technologies and businesses. The proportion of high-tech manufacturing in the added value of industries above the designated size reached 15.1 percent in 2021, and energy consumption and CO2 emission per unit of GDP decreased by 2.7 percent and 3.8 percent from a year ago in the same period.

In 2021, the country's forest coverage reached 24.02 percent, with a forest stock volume of 19.49 billion cubic meters. Its grassland vegetation coverage stood at 50.32 percent, and the wetland protection rate reached 52.65 percent.

China has realized the largest growth in forest resources among all countries in the world.