BEIJING, April 18 (Xinhua) -- China announced the cooperation plan for its future Chang'e-6 mission, offering to carry a total of 20 kg of solicited payloads, according to the China National Space Administration (CNSA) on Thursday. 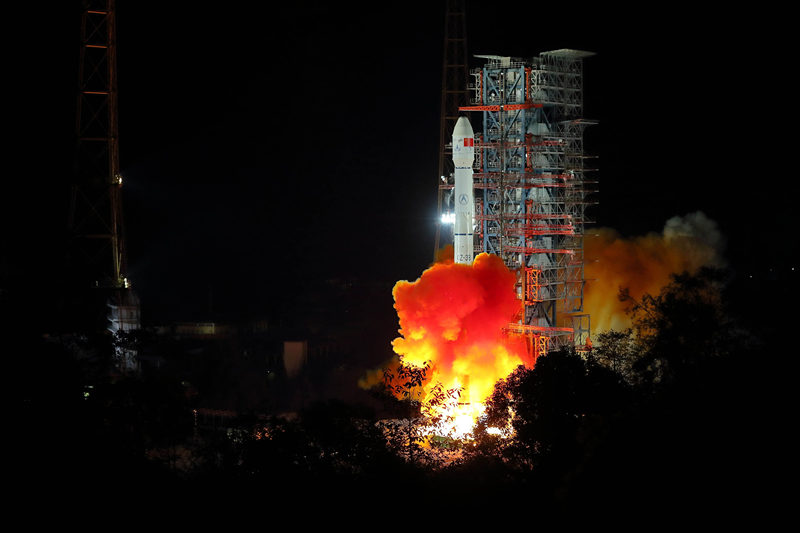 The orbiter and lander of the Chang'e-6 mission will each reserve 10 kg for payloads, which will be selected from both domestic colleges, universities, private enterprises and foreign scientific research institutions, said Liu Jizhong, director of the China Lunar Exploration and Space Engineering Center of the CNSA, at a press conference.

China is expected to launch the Chang'e-5 probe by the end of this year to bring moon samples back to Earth.

As the backup of the Chang'e-5 mission, the Chang'e-6 mission will also collect lunar samples automatically for comprehensive analysis and research, Liu said.

Its launch time and landing site will depend on the performance of the Chang'e-5 mission, he explained.

According to Liu, the Chang'e-6 probe will be comprised of an orbiter, a lander, an ascender and a return capsule.

It will enter the Earth-moon transfer orbit, slow near the moon to enter the lunar orbit and descend and land on a preset area on the moon.

After collecting lunar samples, the ascender will rise from the lunar surface for rendezvous and docking with the orbiter flying around the moon. Then the return capsule will fly back to Earth via the moon-Earth transfer orbit, reenter the atmosphere, land and be retrieved.

At the conference, Liu pointed out the specific positions reserved on the lander and orbiter for scientific payloads.

The deadline for applying to join the cooperation plan is Aug. 31, 2019.

"China has always valued exchanges and cooperation with its international counterparts while promoting deep space exploration and scientific and technological innovation," said Zhang Kejian, head of the CNSA.

The Chang'e-4 mission, which accomplished the first-ever soft landing on the far side of the moon, carries four payloads developed by the Netherlands, Germany, Sweden and Saudi Arabia.

"The scientific data has deepened human understanding of the lunar and space environment as well as solar activities," Zhang said.

Sonke Burmeister, who participated in the development of the German payload, depicted the collaboration as "very effective."

"It's really good experience to work with Chinese partners because they are very effective. We build a nice instrument within a very short timeframe," said Burmeister, a researcher with the Institute of Experimental and Applied Physics of the Kiel University in Germany.

"The instrument has switched on every lunar day. It works properly on the moon's surface, which proves the collaboration is very fruitful," he said.

According to Burmeister, one interesting discovery so far is that the secondary radiation produced by the lunar surface soil is different from the dose previously measured by other probes in lunar orbit. "It is very important for astronauts who will travel to the moon."

He is also looking forward to participating in the collaboration provided by the Chang'e-6 mission.