China is highly concerned about the situation in Venezuela and called on all parties to remain rational and calm while seeking a political solution, an official said at a routine press conference on Thursday. 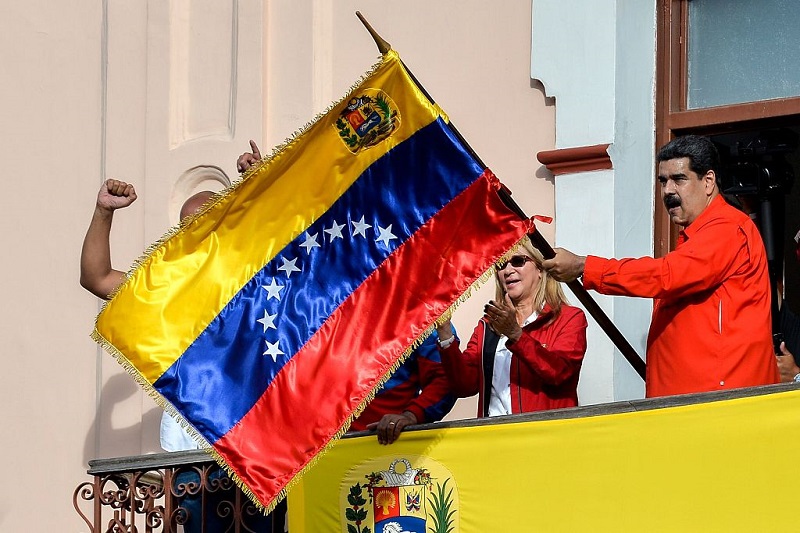 Venezuela's President Nicolas Maduro (R), flanked by his wife Cilia Flores (C), holds a Venezuelan flag while speaking from a balcony at Miraflores Presidential Palace to a crowd of supporters to announce he was breaking off diplomatic ties with the United States, during a gathering in Caracas on January 23, 2019. (Photos: VCG)

“We hope the Venezuelan issue will be resolved through peaceful dialogue within the framework of the Constitution,” Hua Chunying, spokesperson of China's Ministry of Foreign Affairs said in Beijing.

China has consistently pursued the principle of non-interference in other countries' internal affairs and opposed outside intervention in Venezuela. China supports the efforts of the Venezuelan government to safeguard national sovereignty, independence and stability.

“We hope that the international community will jointly create favorable conditions for this,” she said.

Venezuelan authorities have arrested a group of soldiers for looting an arsenal of the National Guard, Defense Minister Vladimir Padrino Lopez said on Monday.

The National Bolivarian Armed Forces (FANB) confirmed all military units were operating under "complete and absolute normality," according to Xinhua News Agency.