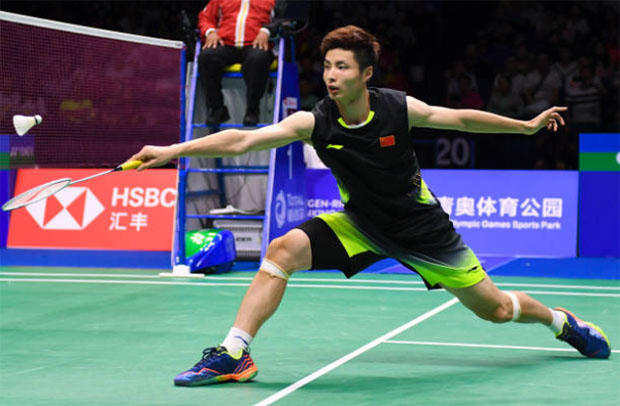 China's Su Yuqi is one of the world's top badminton players, pictured here at the 2018 Asiad in Jakarta,Indonesia, August 21, 2018. (Photo: AFP)

Chinese men's team, the 2018 Thomas Cup winner, stood atop Asia for the sixth time, and undoubtedly made amends for their loss to then hosts South Korea four years ago.

After losing the first game 21-14 to Anthony Sinisuka Ginting, China's Shi Yuqi had to save two match points in the second game to force a decider at 23-21.

The two players went neck-and-neck in the first half of the decider. Despite cutting the deficit to one point at 15-16, Ginting appeared to suffer hamstring and called for a medical timeout.

Ginting was further hampered afterwards as he could not completely make his move, but he managed to possess a set point at 20-19 due to Shi's error.

However, as injury worsened, Ginting decided to withdraw when trailing at 20-21, and had to be stretchered off.

After building a 7-3 lead into the duel, Chen had several misjudgment to let his opponent turn the proceedings. He surrendered a 19-17 advantage to lose the opening game 21-19.

Chen regrouped himself to surge from midway through the second game to triumph 21-16.

In front of thousands of jubilant home crowds, Christie led 11-9 at the changeover of the decider, but Chen steadied his nerves for a 21-18 victory.