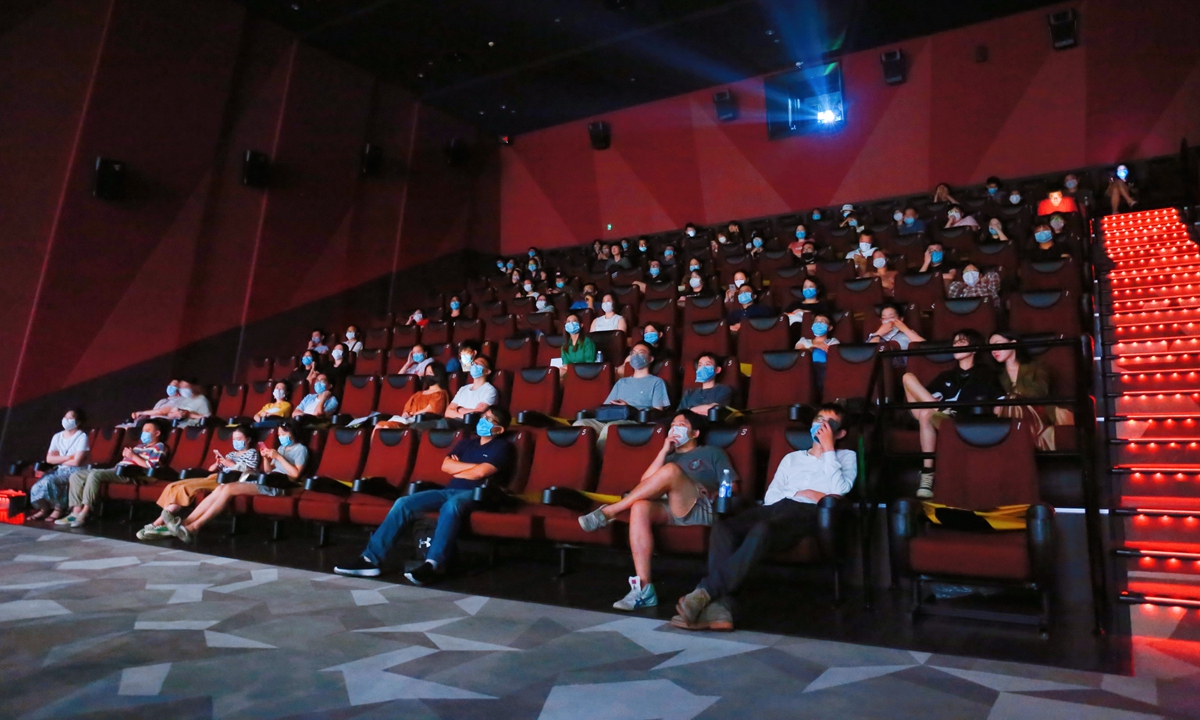 Moviegoers watch the film The Eight Hundred on August 14 in Shanghai. (Photo: cnsphoto)

The milestone, which followed by record-breaking box office on New Year’s Day, was supported by the country’s effective epidemic prevention and control measures that allowed moviegoers return to cinemas, while theaters elsewhere remain largely closed, according to a survey China’s ticket platform Beacon sent to the Global Times.
That’s the first time China’s box office raked in more than the North America box office. “China’s effective control of the coronavirus epidemic is the primary reason behind this achievement,” the survey noted.
The global film market in 2020 was severely impacted by the COVID-19 pandemic, and the total box office dropped by more than 70 percent year-on-year, the China Film Administration said on Friday, according to a report of China Media Group.
North America, which traditionally leads the world’s box office, has lowest sales in four decades, while China became the world’s fastest-recovering film market thanks to active epidemic prevention and control measures, the administration said.
The national theater resumption rate reached 94.8 percent by the end of 2020, China’s ticket platform Maoyan announced on Friday.
The survey on Saturday also showed that in 2020, the number of theaters and screens in China was on an increasing trend even under the shadow of the COVID-19 epidemic.
The number of theaters in China reached 11,856, an growth of 4.4 percent over 2019, and the number of screens increased 8.3 percent to 75,581, laying a foundation for the continued recovery of the film industry.
High-quality content remains the key motivator for movie fans. Domestic films’ box office in 2020 accounted for 83.72 percent of the total box office. It was 62 percent in 2019.
The top 10 box office films of the year were all domestic films with war epic The Eight Hundred ranking the first with 3.11 billion yuan and becoming the first Chinese blockbuster to top global box office charts.
Shi Wenxue, a film critic based in Beijing, told the Global Times that the result of the box office during the New Year holiday was due to the good quality of the films. A Little Red Flower and Shock Wave 2 have currently earned a rating of 7.7/10 and 7.9/10 on China’s review site Douban.
According to Maoyan’s real-time data, box office during New Year’s Day reached nearly 600 million yuan ($91.8 million), breaking that day’s record.
A Little Red Flower starring Jackson Yee, who won the award for Best New Performer at 2020’s Hong Kong Film Award, and Liu Haocun, the protagonist in Zhang Yimou’s film One Second, topped the box office with 543 million yuan in the first three days of its release, followed by the comedy Warm Hug and crime thriller Shock Wave 2.