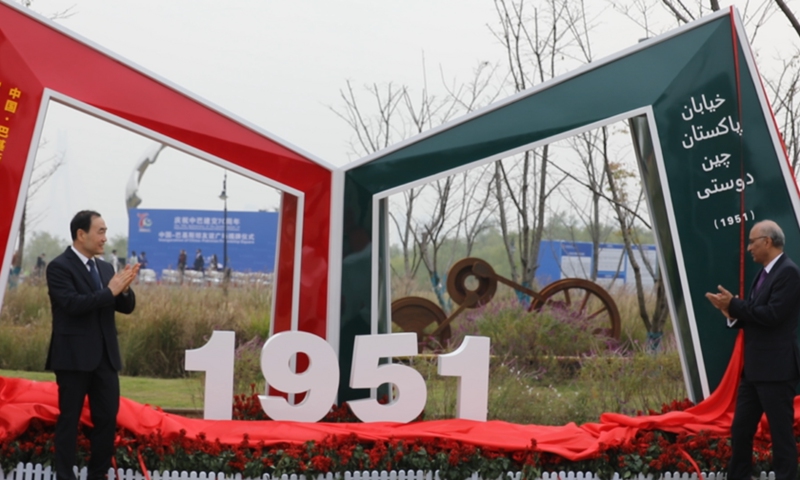 The China-Pakistan Friendship Square was unveiled in Wuhan, capital of central China's Hubei Province, on Tuesday, as part of the celebration of the 70th anniversary of the establishment of diplomatic ties between China and Pakistan.

The square, located beside the Yangtze River in the city center, is the first China-Pakistan Friendship Square in China.

Covering an area of about 10,000 square meters, the square has set statues, lampposts and seats featuring cultural elements from both countries.

Among the statues is one in the form of two shaking hands, commemorating the 70 years of China-Pakistan friendship. With the red hand representing China and the green one symbolizing Pakistan, the statue conveys the idea that the two countries are friends standing together through thick and thin.

On either side of the square are sculptures of the Chinese sturgeon, the national first-class protected wildlife, and the Markhor, the national animal of Pakistan. With the two precious animals looking at each other, the sculptures imply that the two countries keep watch for and help one another.

"It's a historic day today," said Moin ul Haque, Pakistani Ambassador to China. "The square truly reflects the great affinity, the great solidarity and most importantly the deep love, trust and respect between our two countries and peoples."

Haque said that a similar friendship square is being established in Karachi, the biggest city in Pakistan, and will be inaugurated soon.

According to Feng Xiguo, deputy director of the Hubei Provincial Foreign Affairs Office, Hubei and Pakistan have frequent exchanges and extensive trade cooperation.

As of September 2021, Pakistan had invested in 75 enterprises in Hubei, with a total contracted investment of 15.14 million U.S. dollars. And in the first three quarters of this year, Hubei's imports and exports with Pakistan reached 3.87 billion yuan (around 605 million U.S. dollars), up 146.9 percent from the same period last year, according to Wuhan Customs.

In 2016, when Hubei was hit by floods, the Pakistani government donated 10,000 tonnes of rice to the disaster areas. In early 2020, after the outbreak of COVID-19, masks donated by the Pakistani government and people reached Hubei urgently. Once the epidemic was under control in Hubei, the province promptly donated masks, protective suits and other supplies to Pakistan, and sent medical teams to support the country's fight against the epidemic.

"The province of Hubei and the city of Wuhan have a very special place in the hearts of the people of Pakistan," said Haque. "They admire your resilience, courage and efficiency in fighting the COVID-19 pandemic. Your courage and discipline in achieving a great victory in the people's war against the pandemic was a beacon of hope for the entire world."

During his visit to Hubei this time, Haque said he would also attend a commendation ceremony for the medical teams from the city of Yichang in Hubei, who had stayed in Pakistan for a year to assist them with fighting the pandemic.

Regarding the unveiling of the China-Pakistan Friendship Square, Feng said: "The iron-clad brotherhood between China and Pakistan will always be remembered in the hearts of the Chinese and Pakistani people. Hubei will strengthen cooperation with Pakistan in fields such as infrastructure construction, agriculture, technology and education in the future."

At the square's unveiling ceremony, Haque signed letters of intent for friendly relations with two cities in Hubei. Cooperation agreements between universities and medical companies were also signed by representatives of the two countries.