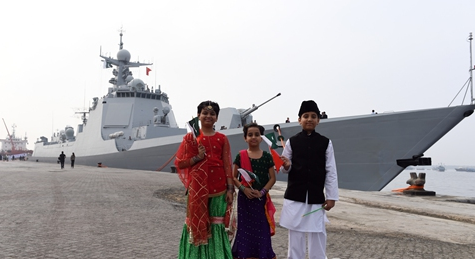 Pakistani children hold the national flags of China and Pakistan after the welcome ceremony for arriving Chinese warships at the port of Karachi on January 5, 2020. (Photo: eng.chinamil.com.cn)

The ongoing China-Pakistan joint naval exercise "Sea Guardians-2020" in the North Arabian Sea is expected to be the first of many to come, as the two countries have now developed a series of joint exercises covering the navy, army, and air force.

The exercise is also the first between China and Pakistan that will feature anti-submarine and submarine rescue trainings, indicating a high level of strategic mutual trust, experts said on Tuesday.

The exercise started on Monday in the port city of Karachi, Pakistan, and will be held in the North Arabian Sea until January 14, the PLA Daily reported on Tuesday.

This is the sixth joint naval exercise between China and Pakistan, the PLA Daily report said, but it is the first time the exercise was named "Sea Guardians," according to navy.81.cn, the Chinese Navy's news website.

Zhang Junshe, a senior research fellow at the PLA Naval Military Studies Research Institute, told the Global Times on Tuesday that serializing the drills and making them a routine will further enhance China and Pakistan's friendship and cooperation.

Pakistan will have two frigates, two missile boats, a fixed-wing anti-submarine aircraft, two vessel-based helicopters and about 60 members of special forces participating in the drills.

Zhou Hanwen, an executive director of the exercise, said that previous China-Pakistan joint naval exercises did not feature anti-submarine and submarine rescue training, and the exercise this time will enhance the two countries' capability of dealing with underwater threats, China Central Television reported.

Zhang said that the training involving submarine will boost the two navies' combat capabilities and show a high level of strategic mutual trust.

The goal of the Sea Guardians-2020 drills is to boost the two countries' military cooperation, enhance their all-weather strategic cooperative partnership, build a safe maritime environment and enhance the two navies' capability to deal with maritime terrorism and crime, the PLA Daily report said.

This joint exercise is not related to ongoing regional affairs and is not aimed at any third party, the PLA Daily said.