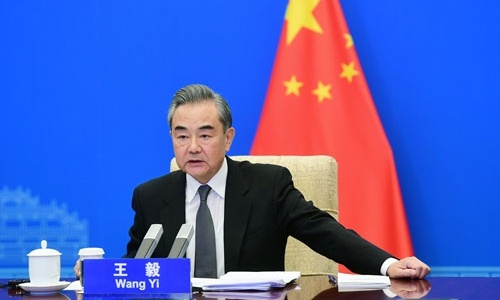 Chinese State Councilor and Foreign Minister Wang Yi said China and Pakistan should strengthen communication and coordination on Afghan issues to support a stable power transition in the country and peace in the region. Wang made the remarks during a phone conversation with his Pakistani counterpart on Wednesday.

Wang also spoke on the phone with Turkish foreign minister on Wednesday to exchange opinions on the Afghan situation and called on Afghan Taliban to break away with terrorist forces including the East Turkistan Islamic Movement.

The so-called "democratic transformation" in Afghanistan proved to be unrealistic, which only brought about unwanted consequences. It is a lesson to be learned, Wang said in his phone call with Pakistani Foreign Minister Shah Mahmood Qureshi.

As responsible neighbors to Afghanistan, China and Pakistan need to strengthen communication and coordination to support a stable transition in the country, and play constructive roles in maintaining regional peace and stability, Wang told his Pakistani counterpart.

Wang noted that the two sides should encourage all Afghan parties to strengthen solidarity, and establish a new broad-based and inclusive political structure that is suited to the Afghan national conditions.

China and Pakistan should also support Afghanistan in its fight against terrorism, to prevent the country from becoming a hotbed for terrorism again.

The Chinese and Pakistani embassies in Afghanistan are still operating normally, and the two sides should communicate with the Taliban to ensure the safety of embassy personnel and institutions there, Wang added.

He went on to say that the two countries, using their unique role as neighbors, should promote international cooperation involving Afghanistan in an orderly manner to push the Afghan situation gradually into a virtuous circle.

For his part, the Pakistani Foreign Minister Qureshi said that as Afghanistan's neighbors, Pakistan and China are countries most expecting Afghanistan to realize peace. The country needs a political settlement through negotiations in the future, and Pakistan stands ready to strengthen communication with China and establish a multilateral coordination mechanism involving neighboring countries of Afghanistan, the Xinhua News Agency reported.

Wang also exchanged views on the Afghan situation via phone with his Turkish counterpart, Mevlut Cavusoglu, on Wednesday.

Wang expressed his expectation to see the commitments of the Taliban be turned into concrete policies and actions, after the Taliban leaders sent positive signals to the outside world. The key now, he said, is to find a reconstruction path that is suited to Afghanistan.

To do so, the Taliban must make a clear break with all terrorist forces and crack down the international terrorist organizations designated by the United Nations Security Council, including the East Turkistan Islamic Movement.

Cavusoglu acknowledged China's views and stance on the Afghan situation to be objective and fair, and said the Turkish side is willing to maintain close coordination with China and push the situation in Afghanistan to develop in a favorable direction as soon as possible, Xinhua News Agency reported.

During the talk with Pakistani Foreign Minister, Wang also brought up the Dasu terrorist attack, hoping that Pakistan will make every effort to arrest the perpetrators, and punish them in accordance with the law.