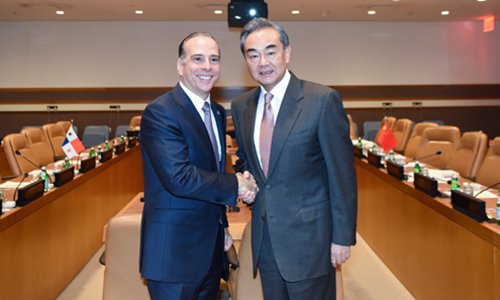 China and Panama agreed on Wednesday to advance bilateral relations based on mutual benefit and mutual respect.
Chinese State Councilor and Foreign Minister Wang Yi met with Panamanian Foreign Minister Alejandro Ferrer on the sidelines of the 74th session of the United Nations (UN) General Assembly high-level events week.
Wang said Ferrer has, since taking office, firmly adhered to the one-China policy and actively pushed forward bilateral relations, for which China highly appreciates.
Since the establishment of diplomatic relations between China and Panama, bilateral relations have developed rapidly across the board, Wang said, noting that the potential for cooperation in various fields has been fully unleashed.
Over 50 cooperation agreements have been signed between the two sides, and Panama's exports to China increased by more than 30 percent last year. This shows the tremendous potential and scope for cooperation between China and Panama given the current downturn in world trade, said Wang.
Wang said the Chinese side will encourage Chinese enterprises to actively participate in cooperation with Panama so as to benefit the two peoples.
China will unswervingly consolidate and develop friendly relations with Panama, and is willing to work with Panama to lift bilateral relations to a new level, said Wang.
Wang stressed that China's cooperation with Latin American countries including Panama is sincere and selfless as China never attaches any political conditions nor does it pursue any political or geopolitical interests.
Latin America is a big stage for cooperation among countries rather than an arena for big power politics, Wang said, adding that China-Panama cooperation does not target any third party and should not be disturbed nor affected by a third party.
During the meeting, Wang asked Ferrer to convey President Xi Jinping's cordial greetings to President Laurentino Cortizo. Ferrer conveyed Cortizo's sincere greetings and good wishes to Xi and extended warm congratulations on the 70th anniversary of the founding of the People's Republic of China.
Ferrer said Panama attaches great importance to developing relations with China and will firmly abide by the one-China policy and be China's reliable partner forever.