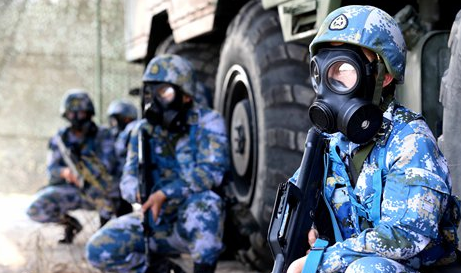 Soldiers wearing protective masks get ready for a nuclear-biological-chemical defense operation conducted by the coastal missile troops with the navy under the PLA Eastern Theater Command on October 30, 2018. (Photo: Global Times)

An elite team of 25 soldiers from the People's Liberation Army (PLA) 75th Group Army arrived in Thailand on Sunday via a transport aircraft of the PLA Air Force, the PLA Daily reported on Monday.

The annual Cobra Gold series joint drills have become the largest joint military exercise in Southeast Asia, and this year's edition will run from Tuesday to March 6 in Thailand, the report said.

The Chinese team will participate in desktop maneuvers, actual combat exercises, humanitarian construction, and high-level forums, said Sun Zhi, leader of the Chinese team, according to the report.

By participating in the 2020 Cobra Gold, China is eagerly participating in defense cooperation with neighboring regions, which will enhance communication with Southeast Asian countries including Thailand, providing Chinese solutions and power in humanitarian relief operations, Sun said.

More than 8,900 soldiers and officers from 29 countries will join the drills.

The US is expected to send 5,500 personnel and 64 fighter jets including the F-35 stealth fighter jet for the first time, as well as an amphibious assault ship and an amphibious landing dock, foreign media reports said.

China has been sending observers to the annual exercises since 2002 and participating in the drills since 2014.