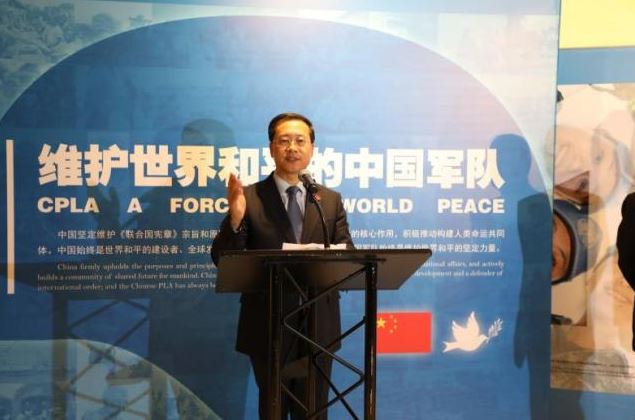 Ma Zhaoxu, China's permanent representative to the UN, speaks at the ceremony of China peacekeeping exhibition in the United Nations, Feb. 11, 2019. (Photo: China Plus)

An exhibition on China's peacekeeping input was launched Monday evening at the UN headquarters.

At the ceremony to launch the show, Ma Zhaoxu, China's permanent representative to the UN, said that China has become the largest contributor of peacekeepers among the five permanent members of the Security Council.

China first sent peacekeepers to carry out UN operations in 1990, said Ma, adding that over the past three decades, China has sent over 39,000 peacekeepers to UN missions around the world

Last December, China's share of the UN peacekeeping budget was raised from 10.24 percent to 15.22 percent, making it the second largest contributor only after the United States.

"China continues to be recognized as an essential partner across the spectrum of UN peacekeeping," Khare said, adding that the nation "currently deploys a total of 2,508 uniformed personnel, including 70 women, to eight of the UN's current peacekeeping missions."

UN Military Adviser for Peacekeeping Operations Carlos Humberto Loitey told Xinhua that China's contribution to the UN peacekeeping is worth "highlighting," with "good quality" of peacekeepers and "outstanding support in terms of training."

Mao Naiguo, head of the Chinese PLA delegation for international communication, said "China firmly upholds the purposes and principles of the UN charter and its central role in the international affairs."

On safeguarding maritime passages, data from the exhibition showed since December 2008, the Chinese Navy has regularly deployed 3 to 4 vessels in the Gulf of Aden to carry out escort missions.

"As of December 2018, 31 batches of 100 vessels were dispatched to provide safety protection for more than 6600 Chinese and foreign vessels, rescuing, escorting and salvaging more than 70 ships in distress," according to the exhibition.

In addition, in recent years, the Chinese military has helped in various international disasters such as Haiti earthquake in 2010, Philippine typhoon Haiyan in 2013, and Ebola epidemic in West Africa.

The 12-day exhibition is co-hosted by the Political Work Department of China's Central Military Commission and Chinese Permanent Mission to the United Nations.