South China's Guangdong Province penalized 20 local officials on Thursday for dereliction of duty in dealing with the local COVID-19 outbreak in May and June, making it the latest province to punish officials for their poor performance in the coronavirus fight, which is seen as an important part of China's dynamic and flexible epidemic prevention and control strategy that has proven effective in the country's fight against the virus. Besides Guangdong, about 50 officials were punished in places which saw flare-ups connected to the Delta variant, including Nanjing, Yangzhou and Zhengzhou — the highest amount and most intense handling after Hubei in 2020. 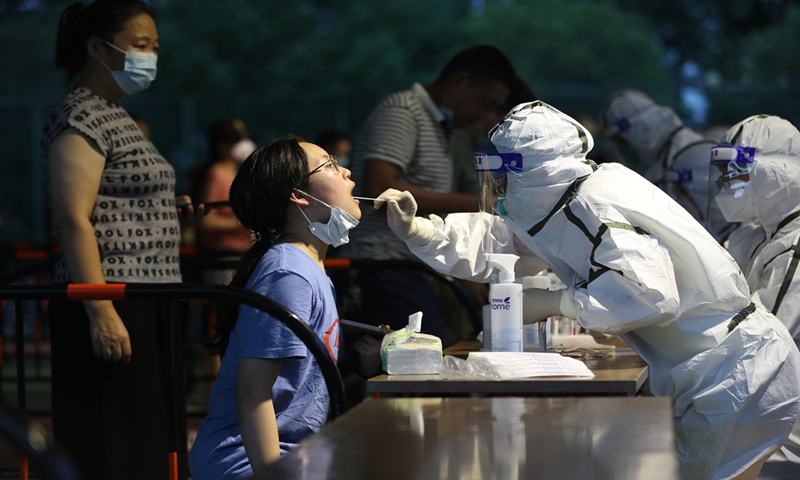 Citizens in Yangzhou, East China's Jiangsu Province are receiving nucleic acid testing on Sunday amid the latest epidemic outbreak with a total of 94 confirmed cases reported as of Tuesday. Photo: IC

Among the 20 Guangdong officials punished, 11 were removed or dismissed from their posts, including Huang Guanglie, director of the Guangzhou Municipal Health Commission; Chen Xiaohua and Bi Ruiming, the Party chief and the deputy Party chief, respectively, of Guangzhou's Liwan district where the new wave of epidemic first started; and Zou Jianzeng, Party chief of Liwan Central Hospital. The other nine were also given warnings, an executive record of a serious demerit or faced an adjustment of their posts.

Guangzhou saw China's first outbreak of the Delta variant in late May, and the outbreak resulted in some 150 cases in several cities in Guangdong in 20 days. According to the Guangdong anti-graft watchdog, weaknesses have been revealed in regular epidemic prevention and control work and some officials have failed to perform their duties or neglected their duties.

The punishments in Guangzhou come as more than half of the Chinese mainland's 31provincial-level regions are in the grip of a new round of outbreaks, described as the most serious since the outbreak in Wuhan, after it was first discovered in Nanjing, East China's Jiangsu Province in July. Since July 20, the fresh outbreak has resulted in at least 47 officials being punished in cities including Nanjing, Yangzhou in East China's Jiangsu Province, Zhengzhou in Central China's Henan Province and Zhangjiajie in Central China's Hunan Province.

The Delta variant-related resurgence in China has involved 17 provinces and regions, with more than 1,000 infections being registered so far. About half were reported in Yangzhou.

Also on Thursday, China's top discipline watchdog, the Communist Party of China (CPC) Central Commission for Discipline Inspection (CCDI), urged a strict inspection and punishment for dereliction of duty by officials in the country's anti-epidemic work, in an article published on its website.

The CCDI said officials should be held responsible for serious breaches in order to push for implementation of responsibilities in epidemic prevention and control.

Ever since the Wuhan outbreak in late 2019, China has paid great attention to holding derelict officials accountable as part of its comprehensive epidemic coping strategy, which has proven effective. So far, more than 3,000 officials nationwide have been punished for poor performance in epidemic prevention and control work.

Chinese observers believed that reasonable punishment of all derelict officials was significant in warning all cities to not let their guard down, as even a small oversight could result in all of China's previous achievements in epidemic prevention coming to nothing.

In addition, the punishment based on Party disciplinary regulations showed that CPC discipline is stricter than China's laws. This strict disciplinary requirement has greatly improved officials' risk management ability, and China's political system of constantly enhancing the talent selection mechanism is superior to the West's rotation of ruling parties, observers said.

More than one year and a half into the COVID-19 pandemic, China has proven the effectiveness of its epidemic coping model in containing the wide spread of the virus, although occasional cluster infections cannot be avoided, and timely punishment of officials was part of this effective Chinese model, Chinese observers said.

A senior official at the Chinese Center for Disease Control and Prevention (CDC) told the Global Times on condition of anonymity on Thursday that it is difficult to constantly maintain high-level guard in China, due to its huge population, large number of ports, vast territory and different levels of management in different cities, and any small oversight or loophole could ruin the previous achievements in epidemic prevention.

Punishment of officials also rang alarm bells for other government officials and came in response to public opinion, observers said.

This week, Yangzhou's cluster in which cross-infection at a nucleic acid testing station resulted in nearly 50 cases drew widespread concern. Yangzhou's anti-graft body has penalized eight officials and public servants for failing to fulfill their duty and excessive bureaucracy.

While China has adopted a strict zero tolerance in its epidemic response, some Western media have been raising doubts and speculation over China's strategy and hyping it as being too strict and rigid.

In a recent report, Bloomberg questioned China's COVID-19 response, saying it risks leaving the country isolated from the world.

However, the Chinese CDC official said that China has been adjusting its epidemic policies and will continue to do so in a timely manner according to the epidemic situation, as the disease will not disappear any time soon and cluster infections were inevitable in the long run.

When China reaches herd immunity through vaccination and when Chinese society can adapt to occasional cluster infections, China will open to the world gradually, the official said.

Better than the West

So far, very few Western politicians have been punished for poor performance in their COVID-19 response, and countries like the US have once again become engulfed in the pandemic, with 98 percent of Americans living in areas where there is high and substantial risk of COVID-19 community transmission, according to CNN.

Xie Maosong, a senior research fellow at China Institute for Innovation and Development Strategy, told the Global Times on Thursday that the West's interpretation of officials' responsibility is based on laws, but in China, the responsibility of officials also involves political responsibility, as Party discipline is stricter than the law.

Many officials were punished due to neglecting their duties rather than breaking laws, and the CPC has raised its requirements for officials when it comes to dealing with risks and challenges, Xie said.

While maintaining the sustainability of the policies, the CPC has also enhanced its talent selection mechanism by assessing officials' COVID-19 response, which is better than the West's two-party system, he said.

The US, due to institutional differences, will not impose punishment on officials or relevant personnel when they fail to carry out their responsibilities in epidemic prevention and control, and lacking high standards will easily make them slack in work, which has partially resulted in the disastrous COVID-19 situation in the country, Xie said, noting that the US government is more skilled in its use of rhetoric, such as its calls for achieving herd immunity, to cover up its incompetence in dealing with the epidemic.

Since the pandemic started, the US has been following a different path - the Trump administration compared COVID-19 to the flu, while the Biden government has been devoted to politicizing COVID-19 origins-tracing work, rather than making real efforts to contain the epidemic outbreak, Chinese observers said, adding that what US politicians are doing is costing lives and risking a crisis of humanity.