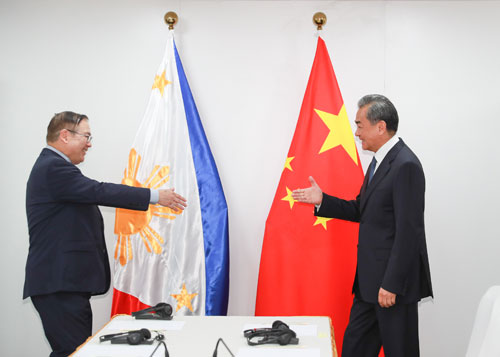 The consensus was reached by Chinese State Councilor and Foreign Minister Wang Yi and Philippine Foreign Secretary Teodoro Locsin during their meeting on the sidelines of the ASEAN (the Association of the Southeast Asian Nations) foreign ministers' meeting and other related meetings in Bangkok, Thailand.

Wang said, Chinese President Xi Jinping and the Philippine President Rodrigo Duterte have met for seven times over the past three years. With the firm faith, the two countries' top leaders have overcome difficulties, removed disturbances and jointly pushed forward the development of bilateral ties.

The facts have proven that the friendly bilateral relations serve the mutual interest of the two sides and the joint cooperation has yielded fruitful results bringing the solid benefits to the people from both countries, said the Chinese top diplomat.

As the country coordinator for China-ASEAN relations, the Philippines made positive contributions to the relations during the past year and accomplishments have been achieved, Wang said.

China is willing to cooperate closely with ASEAN countries, including the Philippines, to focus on the cooperation and development, release the positive messages and make the upcoming foreign ministers' meeting a success, he added.

For his part, Locsin said the Philippines and China enjoy solid mutual trust and friendship.

The Philippines is willing to maintain close high-level exchanges through strengthening bilateral dialogues and communication, so as to promote the mutually beneficial collaboration and cooperate on maritime oil and gas development, he said.

With focus on the regional cooperation, ASEAN is committed to maintaining its centrality and should not join any strategy with geopolitical overtones, he added.