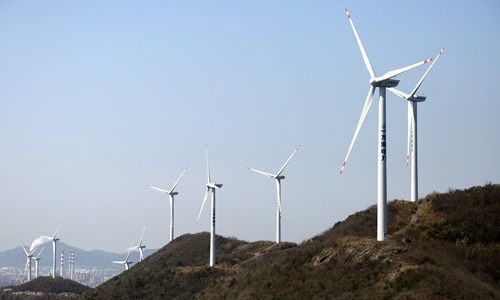 In 2019, total of 44.59 million kilowatt hours of electricity were fed into the grid, eliminating about 44,500 tons of carbon emissions in theory. (Photo: cnsphoto)

The national carbon emission trading scheme will be launched online next month, Chinese media Yicai reported, quoting Lai Xiaoming, chairman of the Shanghai Environment and Energy Exchange on Saturday, adding that the basic structure of the trading system and relevant regulations are completed.

Live tests involving more than 30 Chinese enterprises are being conducted starting this week, and will continue for some time to ensure the national carbon trading scheme will be ready for public use at the time of launch, according to Lai.

The major goal of the carbon market is to serve companies to reduce carbon emissions, so companies are able to reduce emissions at a lower cost with a market-oriented mechanism, said Lai, noting that the crux is to form a reasonable pricing system.

As the carbon market is a relatively niche market compared with the capital market based on years of experimentations in seven local carbon trading pilots, with total transactions reaching 10 billion yuan ($1.55 billion) and trading volume at roughly 500 million tons, which remains relatively small, Lai said.

It is necessary to engage more companies from high energy-consuming industries to the trading regime, and increasing the variety of trades, which will be instrumental to the construction of the carbon trading market in the country, said Lai.

The Ministry of Ecology and Environment issued three regulations on May 19, aiming to further standardize the registration, trade, and carbon emission rights, a key plank for carbon market trading and compliance, according to media reports.

China unveiled plans for a national carbon trading market in a push to cut greenhouse gas emissions in 2017.