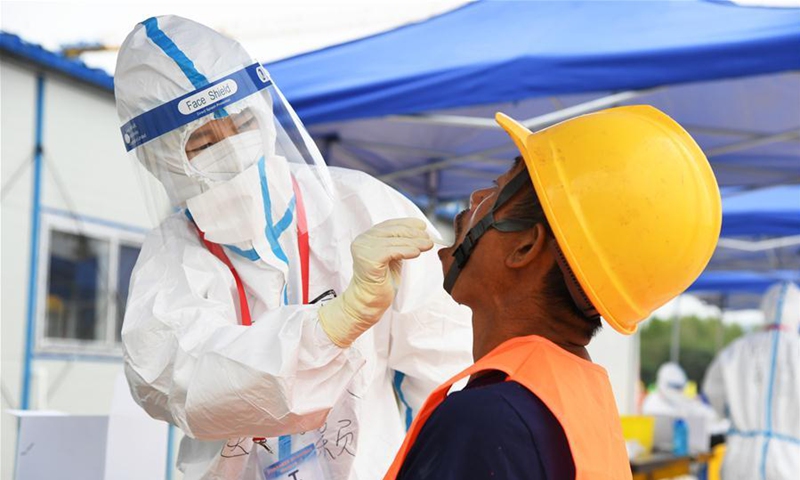 China's State Council Joint Prevention and Control Mechanism against COVID-19 has published a plan to strengthen the country's nucleic acid testing capacity by enabling hospitals and independent labs for a swift response, which is expected to significantly bolster domestic in vitro diagnostics sector.

According to the plan, general hospitals and hospitals for curing infectious diseases, and all levels of disease control and prevention bodies across the country should have the capacity to collect and test nucleic acid samples by the end of September. Each county should have at least one hospital with this capacity as well, the Xinhua News Agency reported on Monday.

China's leading genetic-sequencing company BGI Group told the Global Times on Tuesday that nucleic acid testing is expected to promote the penetration of independent medical labs and the recognition of molecular diagnostics products, which will further boost the growth of the industry.

The company's daily production capacity of nucleic acid testing kits has reached 2 million. By the end of June, it has established 58 COVID-19 testing labs in 17 countries and regions, it said.

Official data showed that China's daily nucleic acid testing capacity has reached 4.84 million by the end of July, and 4,946 hospitals with over 38,000 technicians across the country are capable of doing the test. In addition, the country's weekly production capacity of the testing products has reached 46.48 million doses.

Wuhan Easydiagnosis Biomedicine Co, which contributed to the large-scale COVID-19 nucleic acid testing in Wuhan, Central China's Hubei Province, said in its recent financial report that the in vitro diagnostics industry in emerging markets such as China and Brazil reported the fastest growth, although they held a small share of the global market. It said that the new industry has sound growth prospects in China, with around 1,000 companies operating in the domestic industry.

Thanks to the big technological advances over the past decades, a solid industrial base and an effective regulation system in China, the country has become a major COVID-19 test kit supplier, accounting for at least 50 percent of international supply, a manager with a domestic genomics firm told the Global Times.

The manager who requested anonymity said the nucleic acid test kits developed by the mainstream companies in China are of world-class quality and accuracy, on par with those developed by large foreign companies.

Bao Xianhua, an official with the Ministry of Science and Technology, said at a press conference in August that the overall accuracy rate of the country's nucleic acid test products has reached over 95 percent. While it usually takes about an hour to get results, the new products can show results in just 30 minutes, he said.