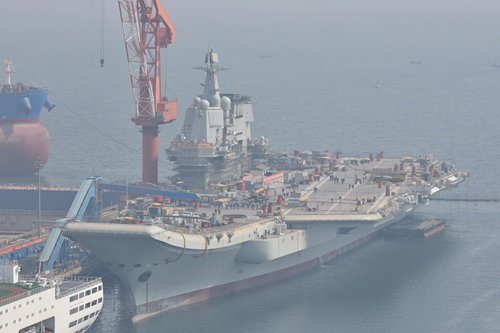 China's first domestically built carrier, known as the Type 001A, is undergoing preparations for its first sea trial, while discussions about its name show that Chinese people hold high expectations of the carrier's ability to resolve the Taiwan question.According to the latest online photos from the Dalian Shipbuilding Industry Company (DSIC) construction site in Liaoning Province, where the carrier was launched and outfitted, the scaffolds on the carrier have been completely removed, and a phased array radar has been installed. "All the equipment and devices on the carrier are in the joint debugging stage, and the main engine has been powered. In 2018, we will present a surprise to the Chinese people," DSIC Chairman Liu Zheng said, according to a report on cctv.com, the official website of China Central Television, on March 13.Liu, who is also the general director of construction of the Type 001A and a member of the National People's Congress (NPC), made the comments to cctv.com when he was attending the Two Sessions."This all proves that the Type 001A is getting ready for its first sea trial, and the exact timing will depend on factors like the weather and sea conditions. April 23 is Navy Day, the founding day of the PLA Navy [April 23 1949], so this might also be taken into consideration," Li Jie, a Beijing-based naval expert, told the Global Times on Tuesday. "After the sea trial, which normally takes about 6-12 months, it will be ready for delivery to the PLA Navy, so it's very likely we will see the carrier enlisted by the end of 2018," said Song Zhongping, a military expert and TV commentator.Full speedThe Type 001A was launched in Dalian on April 26 2017, three days after Navy Day, and the outfitting work only took about one year.The speed with which the Type 001A was built was the fastest in the history of aircraft carrier construction, as it only took two years from the laying of the foundation in the shipyard to its launch, and more importantly, everything from the ship's body to its devices is domestically built, Liu said."The quality of our construction is also world-class. For example, the world-class standard for the flatness of the flight deck is not more than 4 percent, and we made it lower than 3 percent," Liu noted.All in the nameDuring the Two Sessions, Yuan Maorong, an NPC deputy from Taizhou city, East China's Zhejiang Province, suggested naming the carrier "Wei Wen", after a military general from the Three Kingdoms period (AD 184/220-280) who was the first man in history to arrive at Taiwan, according to cctv.com on March 13.Yuan said naming the carrier Wei Wen would show the historical fact of Taiwan being an integral part of China, and push the development of Cross-Straits relations. The discussion of how the ship should be named has also been spreading in social media. Many Chinese netizens suggested simply naming the carrier "Taiwan," while others suggested naming it "Shi Lang", an admiral who recaptured Taiwan for the Qing Dynasty."This displays the high expectations among the Chinese people over solving the Taiwan question, because they want the country to use the first domestically built aircraft carrier as a symbol to announce its determination and ability to achieve this aim, and also send a tough warning signal to the secessionists in Taiwan," Li noted.  However, the carrier is not targeting Taiwan, according to a military expert from a Beijing-based military academy who requested anonymity. He explained that if Beijing decided to use military measures to solve the Taiwan question, the PLA is fully capable of doing so without an aircraft carrier, and Type 001A was made for a greater purpose."The PLA Navy has regulations for naming large vessels like aircraft carriers, which generally use the names of provinces and municipalities," Song said."Liaoning is primarily a platform for training personnel and collecting data through testing, while Type 001A is China's first carrier made for combat missions, so its name could be more special. It's impossible to name it with a person's name, for only vessels used for scientific research can use a person's name in China," said the anonymous military expert.