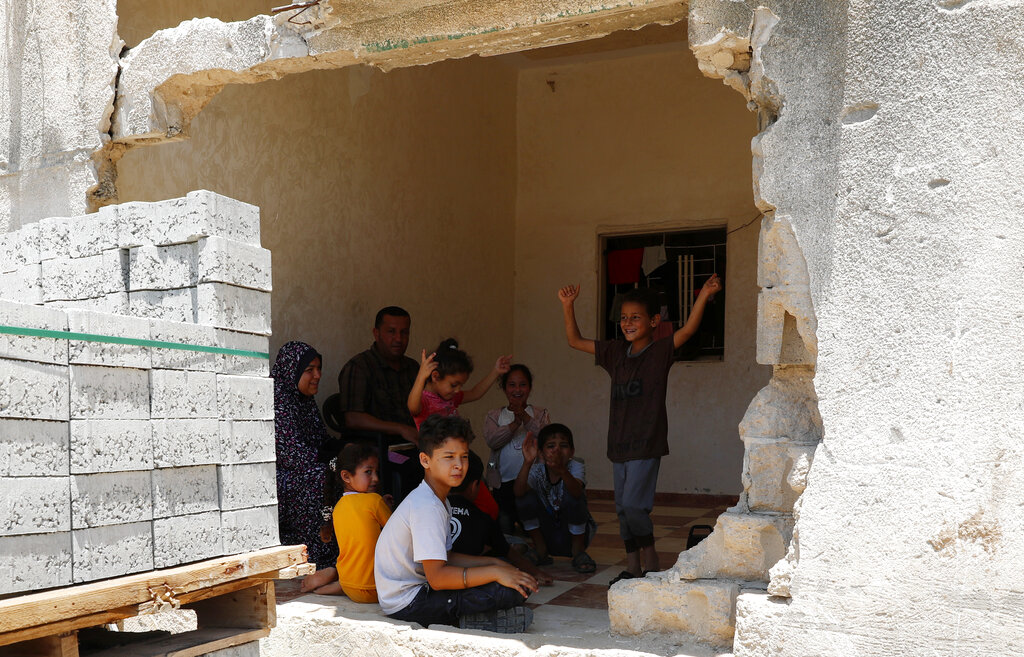 Esraa Nassir, left, and her husband's Kamal, center, sit with their children while dancing at damaged room of their destroyed family house, which is heavily damaged by airstrikes during an 11-day war between Gaza's Hamas rulers and Israel last May, in Beit Hanoun, Gaza Strip, Thursday, July 15, 2021. (Photo: AP)

Wang made the remarks on his official visit here, a coastal city of northern Egypt, during which he held talks with his Egyptian counterpart Sameh Shoukry and met with Arab League Secretary-General Ahmed Aboul-Gheit.

On the occasion of the Palestinian-Israeli conflict, China, in the rotating presidency of the United Nations Security Council, has pushed the security council through five rounds of review to the Palestinian issue and delivered a Presidential Statement, Wang said.

Noting that China recently also held a seminar for Palestinian and Israeli peacemakers, Wang said China has made unremitting efforts to promote a ceasefire and resumption of talks between Palestine and Israel.

Without a just foundation, no peace can last, Wang said, stressing that the independent statehood of Palestine should not be delayed indefinitely, and the legitimate rights of the Arab people should not be ignored chronically.

The "two-state solution" is the only realistic way to solve the Palestinian issue, he added.

Wang said all parties concerned on the Palestinian issue and the international community should make practical efforts to promote the "two-state solution" on the basis of UN resolutions. As such, the Chinese side puts forward the following three routes:

The first is to enhance the authority of the Palestinian Authority, giving them the power to exercise national sovereign functions in security, finance and other fields, to achieve the effective management and control of the autonomous and occupied Palestinian territories.

The second is to support all Palestinian factions to improve solidarity, realize internal reconciliation through consultations and talks, and form a unified position to negotiate for the Palestinian issue's solution.

The third is that Palestine and Israel should be encouraged to resume peace talks on the basis of the two-state solution. China welcomes representatives of both sides to come and negotiate directly in China and calls for a UN-led global peace conference, with the participation of the permanent members of the Security Council and all stakeholders in the Middle East peace process, so as to pursue a comprehensive, lasting, just solution and realize the peaceful coexistence of Palestine and Israel.

Shoukry and Aboul-Gheit, for their parts, said they agree with the relevant ideas that the Chinese side put forth, stand ready to closely communicate and coordinate with China, and hope the international community to urge Israel to stop establishing settlements in the occupied Palestinian territories and remove its blockade on the Gaza Strip.

They said China, a country without record of colonizing or invading the others, has always stood on the side of international morality and principles and made positive impact on solving the Palestinian issue.

It is hoped that China can play a bigger role in regional affairs, they added.