China protests US warship trespassing into waters near the Xisha Islands 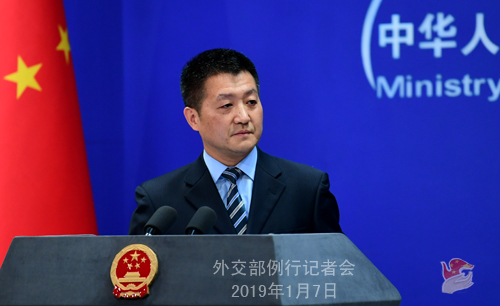 UN Navy warship trespassing into the waters of the Xisha Islands is an infringement on China’s sovereignty, said foreign ministry spokesperson Lu Kang at a regular press conference on Monday.

In accordance with the law, the Chinese side immediately sent military vessels and aircraft to verify and identify the vessel, gave out warnings and drove it away, and lodged a solemn representation to the US, Lu said.

The actions by the US warship violated Chinese laws and relevant international laws, infringed upon China's sovereignty and undermined peace, security and order in the related waters, Lu said.

China firmly opposes it and urges the US to stop such provocative actions immediately. China will continue to take necessary measures to safeguard national sovereignty and security, he added.

Responding to questions about the impact of such provocative actions on the ongoing Sino-US trade consultations, Lu said it would be beneficial to both countries as well as the world to properly solve various problems between the two countries, including the trade issues.

"Both sides should be responsible for creating a good atmosphere for it," he said.