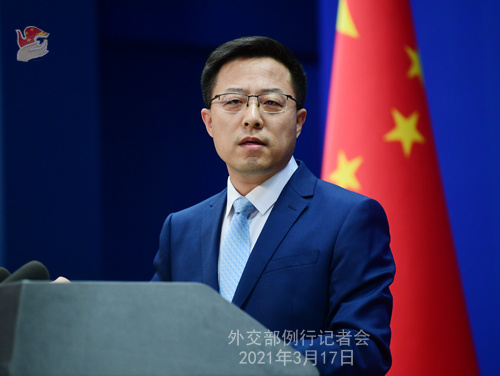 The joint statement from US Secretary of State Antony Blinken and Secretary of Defense Lloyd Austin and their Japanese counterparts called China's behavior "inconsistent with the international order and expressed concern over issues related to Taiwan and Xinjiang".

He said they have no rights to define the international system, let alone imposing their own standards on others.

Their statement ignored the history of relevant issues, disregarded facts and truth, and is another proof of the collusion between the US and Japan to interfere in Chinese internal affairs and tarnish China, Zhao said.

The US and Japan stick to the Cold War mentality and attempt to form a bloc to encircle China, which runs counter to shared aspiration of the majority of countries in the region, Zhao said. "What the US and Japan are doing will only bring chaos and even conflicts in the region, and makes the world see more clearly the true color of the so-called US-Japan alliance."

The statement showed Japan is willing to depend on the pleasure of the US for its selfish purposes, and it downgraded Japan as a US strategic appendage, Zhao said, adding Beijing will take all necessary measures to safeguard its sovereignty, security, and development interests.